A grand bargain for walkable streets

As I wrote before, after the failure of Mayor Bloomberg's congestion pricing campaign in 2008, advocates realized that the plan had failed to capture the interest of drivers. "Gridlock Sam" Schwartz then came up with a plan that offered "something for the drivers" to overcome their resistance. The problem is that it offers them too much. The proposed toll reductions and highway widenings would encourage a huge amount of driving, offsetting a large percentage of the reduction in driving encouraged by the added tolls and bus service.

The key failing, which I've also observed in other politicians who claim to be pro transit, is the practice of dividing the world into drivers, transit riders, cyclists and pedestrians, with the assumption that there is never any overlap or change among these categories, and that all people care about is their own transportation. This may be a good simplifying assumption to start with, but when it leads you to disasters like widening the Van Wyck, it's time to step back and revisit your assumptions.

So let's go back to what we actually know: that a significant segment of the opposition to congestion pricing came from people who currently drive. These people will probably not be driving much longer, however. I've been to the congestion pricing hearings. Most of the active opponents are over fifty. In thirty years, most of them will be dead, and many of those who are still alive will be too infirm to drive.

There are of course plenty of people under fifty who love driving, hate paying for transit, and fear that losing their status as drivers will infantilize them and drive all the chicks away. But they're a much smaller proportion of younger generations than they are among the Baby Boomers, and even the diehard motorists will think twice about driving when gas gets up over ten dollars a gallon. We shouldn't be building big highways for them.

The question becomes, then, how do we structure it so that "we" don't wind up taking "their" money? What can we do for the people who are currently drivers, and don't see any benefit to decreased Midtown congestion or increased transit funding? Something along the lines of Donald Shoup's parking benefit districts? 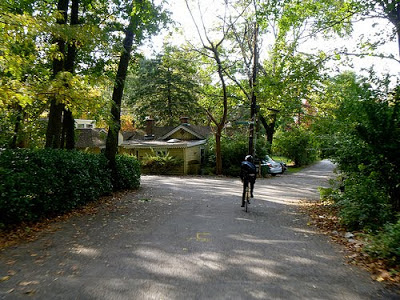 Many streets in Riverdale have no sidewalks. Photo: *Bitch Cakes* / Flickr.
I have one idea. Let's take the sidewalks off their hands.

Although the City Department of Transportation oversees sidewalk maintenance, they report that 99% of the 12,750 miles of the city's sidewalks are the responsibility of whoever owns the adjacent property. The only thing the DOT has to do is send out inspectors and then fine the property owners whose sidewalks aren't up to standards. In practice, they have a program where they repair the sidewalk themselves and send the owner the bill.

From a pedestrian's point of view, that sucks. It means that the sidewalks quality is inconsistent from one property to the next. The city is constantly tempted to cut the sidewalk inspection budget, which provides a huge incentive for the property owners to skimp on sidewalk maintenance and hope that the inspector won't notice. When the inspectors do their job the property owners complain, hence the endless stream of kvetching to elected officials, community boards and the media in the Bronx, Brooklyn, Queens and Staten Island.

Of course, it costs money to maintain all those sidewalks. According to this article, it cost the City of Los Angeles $172,727 to replace a mile of sidewalk. Sidewalk only needs to be replaced at most every ten years, for $17,273 per mile per year, or $220 million. This is a small portion of the $1.4 billion that Gridlock Sam's plan would raise in bridge tolls, leaving almost $1.2 billion for other projects. If enough of "the drivers" are satisfied with this arrangement, then we don't have to widen the Belt Parkway, and we can put all that money into transit projects.

Would "the drivers" like this? The Census website isn't cooperating with me, but I'm pretty sure that most drivers in Brooklyn and Queens own their homes, and a lot of those, especially the vocal ones who show up at meetings and call their city council members, live in single-family or two-family houses. For them, sidewalk maintenance is a big headache that they don't need.

The best part, of course, is that this benefit will accrue to "the drivers" even if they never drive again. Even if they sell their homes, they will still have well-maintained sidewalks to walk on. And so will the rest of us.
Posted by Cap'n Transit at 1:44 AM

While this would probably lead to a lot of problematic unintended consequences, the discussion of most vocal drivers being older made me wonder: What if we gave all current resident drivers a nontransferable permit to drive into Manhattan for free, while charging tolls on out-of-state drivers and anybody who starts driving after the change? The old drivers would benefit from decreased congestion in the medium-term without having to pay for it, but the tolls would become an increasingly useful source of revenue and non-drivers would benefit more and more as the old drivers died off. This is, I think, something like how the phasing-out of rent control (another case of inefficiency-inducing underpricing of resources) has worked?

A little offended by the ageist tone of the post. Plenty of people over 50 live in Brooklyn and Manhattan particularly who do not own cars, or, if they are paying huge garage fees, hardly ever drive. Even many of the people who live in those one and two-family homes are not always drivers. Were it not for NYC's relative pedestrian friendliness I know many in my family and others who would not have been able to live independently into their 90s. In fact, my 90-year-old father in law who is well past his former LI driving life benefits from good streets, transit and taxis (though those are only available because he lives in the city). On the other side of the age spectrum, my nieces, nephews and daughters are choosing to live in walkable and trainsit-rich places. I am technically a boomer and I have always sought out places to live where I do not have to drive much if at all. Admittedly, NYC has improvements to make and I agree with your arguments in favor of better pedestrian infrastructure and amenities, but please do not make this a boomer versus hipster issue.

You're forgetting about snow removal. It's a little more expensive in NYC than LA.

Sheryl, please do not imply that younger generations are all hipsters. ;) The point is not that boomers are drivers (that's prejudice) but that so many drivers in our transit-rich city happen to be boomers. Competent city planning must account for generational trends.