Back in 2010 I wrote a list of things I wanted from transit advocacy organizations, but wasn't getting. Well, there's a new organization in town that aims to deliver at least #3 (discuss new revenue sources), #4 (hold elected officials responsible), #7 (focus on transit) and #8 (a simple, accessible structure). It's called the Riders' Alliance. They're just getting started, but it's a promising start. I've joined, and we'll see where they go. You might want to give them a shot too.

One of their first focus areas is the G train, and they encountered resistance from the MTA to their request for more frequent G service. The Brooklyn Paper's Danielle Furfaro highlights their quandary: "Activists working to better the G train say the Metropolitan Transportation Authority has created a catch-22 by refusing to make any service improvements on the line due to low ridership. But critics claim ridership on the so-called Brooklyn Local remains low simply because service is so bad." 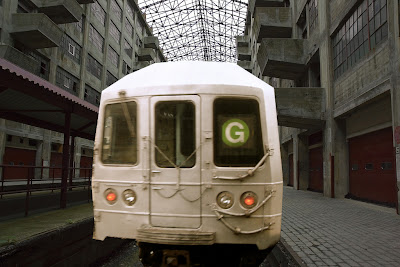 The G train arrives in the Brooklyn Army Terminal, with a little help from Pro-Zak and bitchcakesny.
Well, I claim that ridership on the G train remains low because it's competing with the free, subsidized BQE, and it'll just get worse if the State spends $1.7 billion to replace the Kosciuszko Bridge with a wider one. But what if Riders' Alliance members Dustin Joyce and Sarah Kaufman are right, and there is a pool of untapped ridership that is being kept away by the six-car trains and ten-minute headways?

The most straightforward way to test this would be to simply try it. This is the approach known as tactical urbanism that's already been applied in areas like street design. Imagine if the MTA ran ten-car trains at five-minute headways for a year. I'm guessing that they would see a big jump in ridership. At the end of the year, they could cut the frequency and train lengths back to whatever is necessary to support that ridership.

This kind of strategy is similar to the "penetration pricing" strategy sometimes used in marketing. In that case, the seller sets the price low (or free) temporarily to build awareness and brand loyalty. Examples include the special low introductory rates on credit cards and cable television. In our case, though, the goal would simply be to establish that there is a market for this service.

This has actually been done before, unintentionally, at the MTA. From 1976 through 2009 the G terminated at Smith-9th Streets. Then, when the agency reconstructed the Culver viaduct they temporarily extended the G to Church Street. This past July, after some lobbying, the MTA leadership decided to make the extension permanent.

We should be able to do this kind of experimentation without a major viaduct reconstruction. I know that train cars are expensive, and the MTA doesn't have that many to spare, but I believe that these experiments can be worth it in the long run. If nobody's willing to do it with trains, then we should do it with buses.

Think about a bus route that's losing the MTA a lot of money. If you can't think of one, I have a few suggestions. Or maybe it's a route that hasn't been tried. Or a route that's popular but could use just a little oomph to push it over the edge into running an operating profit.

Now imagine that some organization (it doesn't have to be the MTA, it only needs permission from the Department of Transportation to pick up passengers on the street) has a fleet of twenty brand new, clean buses with expert, responsible drivers. They take the Q79 route, say, and saturate it with buses, every five minutes or less, for a year.

What would ridership look like at the end of that time? Suppose by then you've got enough riders to provide service every fifteen minutes with a 50% recovery ratio. At that point, the MTA can take it over with normal bus service, and the Tactical Transit Strike Force can move on to, say, the B71.

We hear a lot about the power of targeted, experimental interventions to transform city life and give people a sense of what's possible. Now let's do that for transit.
Posted by Cap'n Transit at 1:13 AM

Where do you propose that the MTA come up with a 233% increase in vehicles and a 67% increase in operating personnel?

Nice theory. I'd adjust it slightly--say, 8-car trains every 8 minutes--but I like the thinking.

My concern with the Riders Alliance is that the list of improvements they came up with for the G train demonstrate a lack of understanding in how to talk to the MTA. Demanding 8-car G trains because they are so crowded people can't get on is only going to generate internal eye-rolling at the MTA, because it's just not true.

Also, the G doesn't run 6-car train sets any longer. It's 4-car at all times.

From a transit planning perspective and given the budget constraints with which almost all transit agencies have to deal, it makes no sense to ask for BOTH longer trains and increased frequency.

Personally, I'm a strong believer in using frequency to test the market potential, as my experience suggests that if there is a latent market, frequency begets more frequency. Of course, at some point, if the ridership supports it (let's say five minute frequencies), you should switch to a longer train set to avoid excess labor costs.

The danger in all this: What if the ridership does not support a more frequent service (or longer trains)after a reasonable test? Then you may see less frequent service over most of the day.

Busplanner, I think you're right that we should only try increasing the capacity if the frequency is high enough that we're getting bunching.

Plaws, what I'm saying is that the MTA should have a fund set aside for experiments like this. Off the top of my head, I have no idea how much doubling the frequency of the G train is, but as of 2010 the Q88 costs $130,000 a week or $7 million a year, and had a 74% farebox recovery ratio. Doubling the frequency on the Q88 for a year would cost at most $7 million, but probably much less because some portion of it would be covered by an increase in ridership.

I really don't think the G is competing with the BQE. For individual trips, if you have a car you'll probably drive and if you don't then you probably won't. In the inner parts of Brooklyn and Queens, car ownership is low and the streets are walkable enough that short trips are done on foot. On top of that, the G is such a terrible circumferential, due to unfixable IND-era alignment decisions, that it's not useful for trips not originating or ending on the G itself, so it's not competing for the kind of trips that highways serve. That said:

1. I do think Triboro RX would compete with the BQE: at that radius out of Manhattan, car ownership is much higher, especially in Queens. (In Brooklyn, Triboro is best thought of as railstitution of the B6 and B35.)

2. Car ownership in inner Brooklyn could go up, though this depends on residential parking availability more than on highway capacity.

The other example of penetration pricing is the traditional happy hour, where drinks at bars are half price for the first part of the evening.

I don't think penetration pricing is exactly the metaphor for adding service. Here's why: customers don't make an investment in the service in your example. Credit card teasers are low so that borrowers will rack up big balances that will be paid back at higher, normal-level interest rates. Happy hours entice drinkers by lowering their reasoning skills and running a tab.

Jonathan, you're right that pricing discounts aren't the same as better service. But you're acting like the only mode choice that matters is the Single Trip. Habit decisions are sticky by definition, and people are likely to form habits based on a one-year commitment of better service. People probably won't make Investment decisions based on a one-year commitment, but if the higher frequencies are made permanent they might.

Cap'n, I went back and read your old post, and I congratulate you for taking the time to enunciate what you actually mean in your blog posts. You are always enlightening because you always build from the known to the unknown.
I used to live down the block from the Greenpoint Ave G train station. What I realized about the G train by living there was that because it was a second (or third) train line, it needed to run much more frequently to be of any use. Basically, I would have as much waiting time as someone who lived on the E or F train, and then another 5-10 minutes of waiting time for the G train. That's what made it a second-class train right there.
That's not going to change unless the train somehow makes its way to Manhattan, and until that time, the G train watershed will always be at a disadvantage compared to the L train or A train watershed.

You can have usable circumferentials. The G isn't one of them, mainly because of bad alignment decisions: it doesn't connect at the Brooklyn end to non-IND service, and has a difficult connection at the Queens end. The IND was too cool for a line from QBP to Atlantic-Pacific.

I've started a petition regarding one of the more shortsighted actions by the NYCTA.