A new High Line for Chicago 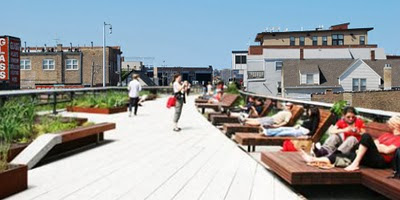 Paris has the Promenade Plantée. New York has the High Line. Lebanon, New Hampshire has the Northern Trail. Soon Chicago will have its own world-class elevated park.

After the planned Bloomingdale Trail right-of-way was taken for a Kennedy Expressway spur, park advocates despaired. But then they realized that there were many more other elevated rail lines with the potential to become attractive public spaces.

Thus the idea for the Red Line was born. "I realized that we had an old set of train tracks running right up the center of the North Side," said Josh Branson, co-chair of Friends of the Red Line. "It has the potential to connect people from Rogers Park, Wrigleyville, Lincoln Park almost to the Near North."

Like the High Line in New York, Branson sees the Red Line as a catalyst for development. "In these tough economic times, you need every boost you can get," he enthused. "The commercial effects would radiate out from every access point. Imagine art galleries on Lincoln Avenue, or quirky restaurants along Clark Street. Chicago needs that growth to realize its potential as an urban center for the Midwest."

The Board of Aldermen is expected to approve the lease of the Red Line later this year, and the last trains will run some time next summer. Activists are raising funds for the the first phase, which will run from Howard Street to Devon Avenue, opening in 2015. Eventually, Chicagoans and visitors will be able to walk as far as North Avenue, and maybe some day to the loop.

City planners are enthusiastic about the line, which will be incorporated into the Green Chicago Vision 2040. Other elements of that plan include the transformation of Lake Shore Drive into Interstate 96, a "green road," where the weight of passing cars will generate enough electricity to light the "Cloud Gate" sculpture in Millenium Park, the installation of a solar powered parking garage in the old Union Station facility, and the redevelopment of Meigs Field as a "biodiesel-only" airport.
Posted by Cap'n Transit at 2:11 AM

Where's their solar powered carousel? If Chicago wants to play in the big leagues of greenspin, they need to get literal.