The guest author for tonight's post is Robert Moses, Chairman of the Triborough Bridge and Tunnel Authority. I have access to the New York Times archives, and tonight I was poking around and came up with this gem: a letter from Moses to Mayor Vincent Impellitteri, delivered March 9, 1952. I looked for another copy online, but didn't find one. Since it's a letter from one public official to another, conducting official business, I believe that it is freely reproducible. I have removed the headlines, which definitely seem like the Times house style, and are the only things that could constitute the intellectual property of that newspaper.

The main reason I'm sharing this with you is contained in the very first paragraph: the proposal that Impellitteri made to Moses. In his reaction, Moses was wrong in several respects, including his ideas that the construction of off-street parking would constitute a "solution of the parking problem" and that tolling the four "free" East River bridges would "serve no immediate purpose, at least so far as the current rapid transit deficit is concerned." He also shows his characteristic double standard where it is expected that the government will subsidize roads and parking, but transit is expected to pay its own way.

On the other hand, I think he's right that the demands for transit expansion, fare stability and high wages in the context of heavy public investment in the competing road network were as hard to reconcile then as they are now. Turning everything over to an autocrat is not a way to build long-term consensus.

You'll find the letter below. Bonus: I also found an interesting television interview with Moses, "the nation's foremost city planner," from 1953. 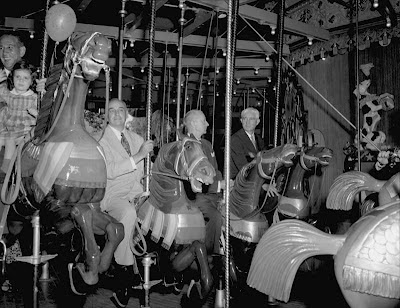 You have asked us to comment promptly on a suggestion that a substantial part of the city's financial problem might be solved by expanding the functions of this authority to include all rapid transit, all private and publicly owned bus lines, all automobile parking (including parking meters and parking garages as well as overnight parking), the Staten Island ferries and all existing East River and Harlem River bridges on the assumption that these will become toll structures. The present rapid transit debt would continue to be serviced by the city, along with future improvements and extensions.

We pointed out in a report to Mayor O'Dwyer, dated Oct. 7, 1949, in answer to a request from him for a frank analysis of the proposal of former Corporation Counsel Paul Windels to establish a Transit Authority, that we did not believe such an authority, which it was proposed would finance improvements and extensions of the rapid transit system as distinguished from the existing debt and operate on a completely self-supporting basis, could sell bonds and remain solvent unless it had a free hand to raise fares at will, without public debate and popular approval. Our final conclusion was that the authority device was not the answer to the city transit problem at that time.

The present suggestion differs from the Windels proposal in other respects beside the fact that it does not involve the assumption of any responsibility by the authority for any construction work or for the deficit for the coming year. The suggestion also differs materially from Mr. Windels' proposal in that back of it is the idea, in our judgment without validity, that a huge new solvent and successful quasi-public structure can be established by placing the credit of the Triborough Bridge and Tunnel Authority back of rapid transit and related operations, adding tolls from presently free bridges, throwing in revenues from parking, and finally establishing substantially higher rapid transit and bus fares.

Let us analyze this plan in somewhat greater detail, and give the facts for our objections to it. To begin with, the Triborough Bridge and Tunnel Authority represents a consolidation of toll crossings and their approaches and related facilities, only recently refinanced on exceptionally favorable terms, which, among other things, will enable us to complete essential approaches, connections and extensions, the cost of which otherwise would fall on the city, state and Federal governments as part of the metropolitan arterial program.

The proposed Columbus Coliseum is the only project we are undertaking which is not directly connected with the main arterial toll system. This authority has established a first-rate reputation because its program is definite, limited and financially sound. We propose to keep it that way.

Under our recent financing, all our future revenues are pledged to our bondholders up to and including the year 1969. We cannot divert any of these revenues. We are trustees. No purpose would be served by discussing in this memorandum the possible use of revenues of this authority after 1969. Certainly this credit cannot be used now for other purposes. Moreover, it should be pointed out that long before our present debt is paid off, there will be other crossings and approaches required, which it will not be possible to finance in any other way than through the issuance of additional bonds.

It is only necessary to refer to the fact that the state has a highway program of over $3,000,000,000, more than a billion of which is urgently required, which it has been unable to finance, and that the toll principle for arterial construction has now been established by the state in connection with its Thruway system. Similarly, Federal highway funds have shrunk as costs of construction have risen. In any event we must assume that no margin of credit derived from our present toll structure can be used to rescue less successful enterprises in other fields.

The addition of the Staten Island ferries as a function of this authority would simply add another headache. Even if the fares were doubled there would still be a substantial deficit in the operation of these ferries.

The transfer of existing East River and Harlem River bridges to this authority as toll structures has a superficial charm which upon closer study is very quickly dissipated. Even if we assume that the public would go along with such a proposal, which we greatly doubt, and if it were in the merest of free movement of traffic to do so, which is also highly debatable, the cost, delays and inconveniences of this conversion would be enormous. We have estimated this cost at between $80,000,000 and $100,000,000. It would take at least three years to bring about. A recent careful estimate of the costs of converting to tolls the most heavily traveled of these bridges, namely the Queensboro Bridge, was $10,000,000. It would be necessary to provide additional ramps and levels, toll booths, and other facilities, and extensive land is required for these purposes. Twenty-year bonds would be needed for this purpose. Certainly this dubious and unpopular device would serve no immediate purpose, at least so far as the current rapid transit deficit is concerned. During the period of conversion and reconstruction of the free bridges, there would be many other additional expenses including the entire replacement of one bridge, namely that carrying Broadway over the Harlem Ship Canal.

It must be apparent that the real purpose back of any such expansion of the functions of the Triborough Bridge and Tunnel Authority is to raise rapid transit fares. This is the only device which will produce really substantial additional income. The statements which have been made regarding savings in operation through superior management by this Authority are no doubt flattering to its members, but cannot stand impartial analysis. We must bear in mind that it is both a state and city policy to establish a general forty-hour week, to grant increases in pay to meet the increased cost of living, and also to provide new and better facilities especially at rush hours.

The expenditures required for the new Second Avenue railroad and the other extensions of the agreed city program in the several boroughs, which will cost at least $550,000,000 not including rolling stock, will not produce substantially higher net revenues, no matter what is the basic fare. In other words, there will not be proportionately more riders as the result of these improvements, although riders will travel much more comfortably and not under present inhumanly overcrowded conditions. To put it another way, this expansion will represent a redistribution of present riders rather than large additions to the total.

No doubt economies can be made in the operation of the rapid transit system through better, tougher and more businesslike administration, but these economies will be relatively small and will not materially change a picture involving a $70,000,000 deficit for the year 1952-53. We must add to this figure also an additional $10,000,000 loss if the private bus lines are put under public operation. There must also be under prudent management a depreciation fund to keep equipment up to date and make normal replacement in the system, totaling some $40,000,000. Finally we must add in the $3,000,000 from ferry operation, which brings the grand total of present deficiency up to $123,000,000. We figure that to make up this deficit would require a subway fare of 17½ cents and bus fare of 17½ cents with no combination rides. At the same time this authority would be faced with the same clamor for extension of rapid transit and bus lines (whether or not they were economically sound) as is the present Board of Transportation.

It must be quite obvious, aside from the many political implications, that the determination of any such large increase in fare is one of policy to be decided directly by the people of the City of New York, and not one which can be brought about by the device of expanding the functions and responsibilities of the Triborough Bridge and Tunnel Authority, even assuming that its present members could be induced to be parties to any such arrangement.

As to more economical operation, there are no figures available, nor has there been an study made, which shows just what could be accomplished. The authority would have to deal with the same Civil Service rules and regulations and Civil Service employes as does the Board of Transportation. The authority would be faced with the same demands from the same unions as is the Board of Transportation, some of which we pointed out in our last report must, as a matter of simple justice, be granted.

It is therefore our conclusion that the suggested expansion of the functions of this authority is unsound and that other more practical, more direct and more immediate means must be found to solve the city's present financial problem.