Today Feargus O'Sullivan had a nice post in the Atlantic Cities called "Why I Moved Back to the Suburbs." The post's slug tells us (no, not like that) that an earlier title was "Why the Suburbs Have the City Beat," which is appropriate since he's talking about Desmond Dekker's old neighborhood.

There were several confused responses, many of which assumed that by "suburb" O'Sullivan was referring to a prototypical suburb like Yorktown Heights or Rio Rancho. Some, like Sarah Goodyear, assumed that it was a difference of British versus American usage, but it isn't. I've seen the same confusion among Americans; the Times has had at least three articles over the past fifteen years calling the Upper West Side "suburban." 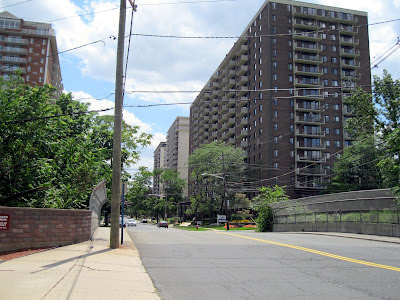 Prospect Avenue, Hackensack. Dense, mostly white, moderately wealthy, commute by bus, drive on weekends, one Starbucks. Outside the New York City limits.
The official definition of "suburb" is a place outside the city limits. But the city limits have changed. Neighborhoods that we would call "downtown" today, like Greenwich Village, Mayfair and the Marais, were all suburbs once. From that official perspective, O'Sullivan's "suburb" of Forest Hill is within the County of Greater London, and thus just as much an inner-city neighborhood as his old neighborhood in Hackney. Greenpoint here in New York City, which he disparages, has a similar administrative status.

The problem is that there are several features of suburbs that catch our attention more than whether they are within the city limits. We often essentialize these features and assume that all suburbs are that way. When someone says "suburb" they may actually be referring to just a few of those features, or even a single one.

To help with this confusion, I have put together this field guide to suburbs. The next time you come across a puzzling use of the term "suburb," just pull up this post and you should be able to sort things out. And the next time you're planning to write about "the suburbs" or "suburban attitudes," please do us all a favor and make it clear which features of the suburbs you're talking about.

Suburban-official: Outside the limits of a large city. By this feature, none of the neighborhoods that O'Sullivan mentions are suburban. Medway is the closest suburb to him. Official-suburbs in the New York area include Guttenberg (the most densely populated municipality in the United States) and Wyandanch (one of the poorest municipalities in New York State).

Suburban-rich: Richer than inner neighborhoods. By this feature, Forest Hill (median income £24,397) is slightly less suburban than Shoreditch (£28,028). But European cities have always had different income distributions than North American ones. In France, suburbs ("banlieue") are associated with poverty, even though there are plenty of wealthy suburbs, like Neuilly where Nicolas Sarkozy was mayor. New York has wealthy "suburbs" within the city limits like Forest Hills and Riverdale, and outside like Montclair and Chappaqua, and plenty of poor districts on both sides of the city line.

Suburban-white: Higher percentages of people of European ethnic backgrounds than inner neighborhoods. This is very typical of the United States, a result of the "white flight" of the 1960s and 1970s. Again, this is reversed in Paris. O'Sullivan's Lewisham is 56% white, while Hackney is 47% white. Notable New York-are counterexamples are Mount Vernon, home of P. Diddy, and Union City (84% Hispanic).

Suburban-bland: "There was nothing going down at all," is how Lou Reed put it. This is hard to quantify, because Jenny's parents probably thought there were lots of things going down. It's certainly clear that there are plenty of neighborhoods outside city limits with active cultural scenes (even for teenagers) and plenty of inner city neighborhoods without much going down. If your measure is funky coffee bars, there are plenty in Bergen County.

Suburban-low-density: This may be what O'Sullivan is really using, but it's all relative. Certainly, his Forest Hill is at least as dense as Greenpoint. There are some New York suburbs that have tried density, including Stamford, Scarsdale, Hackensack, and if you accept them Riverdale and Forest Hills.

Suburban-car: This is a big one for me. Of course, the newer the area the better the road infrastructure and the more parking there is. But it doesn't have to be that way: there are plenty of "streetcar suburbs" and suburbs built around commuter rail stations that are dense, walkable and hard to drive in.

There are a few other features, like Suburban-right-wing, Suburban-safe and Suburban-leafy that I'll leave as an exercise to the reader.
Posted by Cap'n Transit at 11:55 PM

That part of Hackensack is pretty desolate though. Just towers-in-the-park. Hackensack is a victim of zoning: there's stuff on Main Street and it's walkable, except that it's swaddled by massive parking lots and an inconvenient walk for most residents.

Hi! Have just really discovered your blog and have especially enjoyed your posts about Queens (where I grew up), Hudson County (where many of my relatives have lived) and widened roadbeds (and narrowed sidewalks). Also notice via Twitter you seem to be reading and admiring "Death and Life . . . ." -- one of my favorite books.

URBAN -- truly and fully urban
Manhattan, especially below 59th St. But could also be low-rise cores of medieval cities, etc.
Hallmarks of genuine urbanism: Mixed uses (or at least possibility of mixed uses), high ground coverage and "relatively" (compared to other settlements of a similar era, etc.) high densities.

QUASI-URBAN -- has superficial "look" of urbanism, but is not truly urban.
Large areas of the Bronx, like areas around the Grand Concourse, are best examples, although parts of Bklyn and Queens also fit into this category.

These areas typically do not have a good mix of uses (e.g., commerce is forbidden along much of the Grand Concourse). Neither city nor suburb, such areas have the "worst" of both worlds: the problems of relatively high density (without the benefits) and the car dependent quietness/boringness of suburbia (without the beauty, serenity or parking spaces). Harlem and Bed-Stuy also have some of this quality.

Although I've only visited a few other cities, it seems to me other North American cities, like Philadelphia and Baltimore, also have such areas -- although they are not nearly as large as NYC's. Those outlying, tower-in-the-park high-rise "slums" of French cities, would also fit into this category.

Such areas form the "grey" belts of cities that Jacobs correctly saw as usually the weakest (and most troubled) parts of cities (having neither the utility, economic vitality, convenience or "glamour" of truly urban districts, nor the "quiet" of truly suburban areas).

SEMI-SUBURBAN -- older, trolley car suburbs.
Much of Queens (where I grew up)
These areas are very similar to "classic" post WWII suburbs, but the single-family houses are usually on relatively small plots of land. There is a separation of uses, but on a smaller scale than "classic" post WWII suburbs. In actuality, these areas are pretty auto-dependent, despite the presence of bus lines and subways (into "the city").

It's important to remember that these categories are not necessarily sharply defined (as some areas blend gradually into others) and, most importantly, are not fixed categories, as one type of area can naturally (in the absence of zoning) morph into another -- even Manhattan was rural at one time!

Note: as someone who thinks of himself as a Jane Jacobite, it seems to me that mixed uses and mostly high ground coverage (and thus walkability), but NOT necessarily high densities or tall buildings, are the most defining feature of areas that are urban. In other words, you can have a relatively low density area that has mixed uses and it will still be urban, but even a high density area having a severe separation of uses is not truly urban (but, essentially, a high-density suburb). Although in areas that are truly urban, there is also the freedom to build tall buildings for high densities -- which make such areas even more truly urban.

True enough, Matthew, but in Raleigh or Scottsdale it would be considered "urban," right?

Neil and Ben, those terms are fine if you're talking to other Jacobins or Tachievites, but you won't have much success if you go up to, say, Feargus O'Sullivan and tell him, "Well, actually, it's not a suburb, it's a semi-suburb. My post is a guide to what people might mean when they say "suburb," so that you can respond appropriately.

I also disagree about the Grand Concourse. I've lived there, and there's significant retail on the Concourse itself, and a lot on the side streets. There are many "eyes on the street." It would be a lot nicer, of course, if the Major Deegan, the Cross Bronx, the Bruckner and the Bronx River Parkway were torn down.

Regarding the Grand Concourse and the Bronx:

I realize there's a section of the Concourse that's part of the important Fordham Road shopping district, but commerce is absent/forbidden elsewhere on much of the (very long) Concourse itself and its mostly found/restricted to those far apart side streets that go underneath the Concourse. Plus, most commerce is merely retail, not offices, etc.

Compare that with say (gulp!) the truly dense, mixed use Champs Elysee (which the Concourse is supposedly modeled after!); or the many dense, mixed use streets of Manhattan below 59th St. and I think one can see the significant difference between truly urban areas and quasi-urban areas. (Also, in a truly urban area, even a mostly commerce-free street like Park Avenue -- perhaps more accurately seen as a model for the Concourse than the Champs Elysee -- is only a few steps away from lively commercial streets like Madison Ave. and Lexington Ave.)

As someone who is originally a Bronx boy (Lincoln Hospital / St. Ann's Ave.) before moving to Astoria and Jamaica Hills, it seems to me that there actually many high density parts of the Bronx that are strangely not really urban -- just very high density "subway" suburbs. (Bedford Park / Norwood which I use to visit a lot, comes to mind. But, on the other hand, Belmont is a nice exception.)

And, in my opinion, that's what has made much of the Bronx a relatively undesirable "grey" area (as Jacobs sees it). In these areas, you have the "worst" of both worlds: the "problems" that come with relatively high density (without most of the benefits), and the negatives of suburbia too (without the the benefits).

Just pointing it out, but I don't think any part of Hackensack could realistically be considered "mostly White". Most areas along Prospect are still pretty diverse. The "Whitest" area along Prospect is 52% White.

The official definition of "suburb" is a place outside the city limits.

Is there an official definition? Regardless, that definition is not the British English usage. Suburb is often used to refer to outer city neighborhoods.

from a british dictionary:

the outer area of a town, rather than the shopping and business centre in the middle