Transitioning back to slavery?

I've written about the transition movement before, somewhat skeptically. I'm still skeptical about the movement itself, but I agree that something needs to be done. Here's one alternative that we could wind up with, if we don't manage things right: the return of slavery. 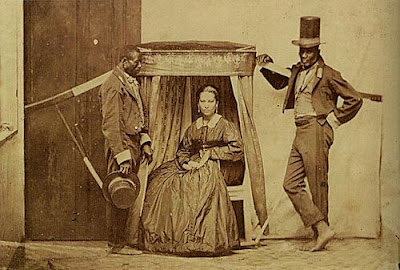 In 2160, could our descendants travel the way that this Brazilian woman did in 1860?
In a Guardian article in February, Jean-François Mouhot observed that the rise of fossil fuels overlapped with the decline of slavery, and in some ways enabled it. He wasn't the first; in fact, he mentions reading it in "a book on climate change." I just listened to an intense exploration of the human history of slavery by Dan Carlin. His dramatic delivery gets a little carried away at times, but this episode is worth two dollars and an hour of your time. (Be warned, there are graphic descriptions of the abuses of slavery.) One of his main points is that to their owners, slaves were the original "labor-saving devices."

Mouhot and others compare the morality of slavery with the morality of fossil fuel use, observing that climate change and other effects of pollution cause a lot of death and suffering around the world. He also asks whether we can borrow some tactics from the abolitionists in our own campaign to reduce or even abolish fossil fuel use. To be honest, I'm skeptical: if the availability of "labor-saving devices" running on fossil fuels gave us the economic leeway to abolish slavery, what is giving us the economic leeway to abolish fossil fuels?

I haven't read James Howard Kunstler's World Made by Hand books, but as I understand them, part of the story involves the reestablishment of some form of forced labor in the disorder following an economic collapse brought on by an energy crisis. If such a thing comes to pass, some people will be tempted to go beyond this kind of serfdom to outright slavery.

I don't think that slavery is inevitable, but I do think it's a danger that we need to try and protect ourselves against. Some might argue that our constitution is protection enough. Others might say that our values have changed enough that we can never go back. Do you believe that?
Posted by Cap'n Transit at 12:56 AM

You're spending too much time listening to Kunstlerian romantics. And make no mistake - the orderly, or even semi-orderly, transition back to the 19th century is a romantic fantasy.

So here's something more likely (still less likely than a massive refugee crisis in Bangladesh that nobody in the first world will know, let alone care, about): for energy generation, there are alternatives. Still more expensive than coal and natgas, but the gap is small and shrinking. For transportation, nobody actually needs to drive - and it's not as if the internal combustion engine needed to be invented for slavery to end, even if you pretend the entire world is the US.

Most of the world will move on. The US won't because it's fundamentally incapable of change. It'll start even more wars to try to get an edge, violate international agreements (nobody is going to sanction it, even in 50 years - it's too big and nuclear), and ride fossil fuels to its own bitter end, as well as the bitter end of any country Americans learn to find on a map. Those self-righteous rural survivalists will not fare any better - in a Russian-style state failure, the mafia will always outgun you; just be thankful you still have medical supplies.

Solar will provide plenty of power to transition to a modern future. Run the numbers.

The question for the US is whether the current power structure in the US will go *along* with the transition, or will collapse violently. If it collapses violently, we'll be begging other countries to please ship us more solar panels and batteries, basically. Perhaps smuggling them in.

I've read Kunstler's "Long Emergency" though not any of the subsequent books, and I check his website from time to time. IMHO you are better off ignoring him on energy. "The Geography of Nowhere" and "Home from Nowhere" are good in the context of moving zoning away from mandating car use, but the prophecy of doom for LA written in 1993 looks pretty funny sitting here in LA in 2012.

I don't buy his idea of a transition back to the 19th century. That's just romanticizing the heyday of his home turf in upstate NY. With 7b people we will either transition to alt energy or collapse, no in between.