Last week I discussed some of the changes that had happened to turn New York City's streets from common space where children could play into dangerous places full of fast cars. Now most of us who have grown up with streets reserved for cars, and many of us have a huge blind spot when it comes to imagining that it could be any different. On Sunday, AM New York ran an article about how hard it is to walk on the sidewalks today. The reporter, Sheila Anne Feeney, gave a whole laundry list of causes: more people, more sidewalk cafes, people distracted by portable devices, people boarding intercity buses, newsstands, garbage bags, and more. 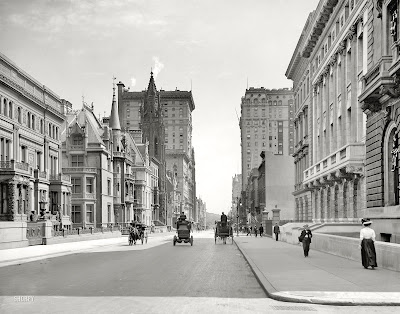 "Fifth Avenue hotels north from 51st Street" and their sidewalk encumbrances. 8x10 inch dry plate glass negative, Detroit Publishing Company.
Sidewalks have been widened right there in Manhattan, in the recent past. The most famous example is Times Square and Herald Square, where some of the parking lanes on Broadway and Sixth and Seventh Avenues were converted to sidewalk space with planters and flexible bollards years before Janette Sadik-Khan reclaimed a larger chunk of space. Under Sadik-Khan, the DOT has widened sidewalks in other parts of the city, including Main Street in Flushing. It can and should do more.

In many cases, widening the sidewalks would actually reverse an earlier narrowing. In a recent disgrace, Sadik-Khan's DOT carried out a sidewalk nibbling planned under her predecessor Iris Weinshall at 96th Street and Broadway, where the median was widened to install a subway headhouse. The DOT refused to take that space from drivers, and took it from pedestrians instead.

It is expensive to move curbs, but it can be done when the will is there. The largest example was in 1908-1909, when the City widened Fifth Avenue, 23rd Street, 34th Street, 42nd Street and a number of side streets. There is a summary of the widenings (with badly scanned photos) from 1912.

The articles all argue that whatever width was taken away from sidewalks was made up by removing "encroachments." This is a phenomenon that we're all familiar with, where business owners and residents will appropriate some of the public sidewalk for their own use. Just this spring, Jackson Heights Councilmember Danny Dromm and the Department of Buildings pressured a supermarket to remove an illegal enclosure. According to the Times back in 1908, many of the stoops, hedges, walls and porches in Manhattan were illegally "encumbering" the sidewalk.

Of course, you'll note that the space freed up from the "encroachments" was originally sidewalk space, not street space, so it was still a reallocation in favor of the street. The Times's 1912 summary makes it clear: "the Board of Estimate has taken the position that the tremendous growth of street traffic requires the freeing of every foot of available space upon the more crowded thoroughfares." The rest of the article makes it clear that they are talking about car traffic, not foot traffic. They needed to maintain the available sidewalk width, because pedestrians were no longer safe to walk in the street.

The world has been dealing with pedestrian crowding for centuries, but sidewalk crowding is a relatively recent problem. What Mitchell Moss said last week is right, in that it is the kind of problem that is much better than its opposite. That's what's often called a first world problem, but in this case the "first world" (mostly the United States) suffers more from the problems associated with empty sidewalks, like obesity, asthma and soccer mom-ism.

I'll write soon about some more shit we can't keep in the street.
Posted by Cap'n Transit at 1:35 AM

I've been thinking about this for the past couple weeks, since I saw an extreme example of a street tree which was blocking off almost all of the sidewalk. Not sure how someone in a wheelchair or with a baby stroller would get by that. I was thinking: why can't this tree be taking up room in the street, instead of blocking the entire sidewalk? It wouldn't even take up an entire parking space, and would just make for a nice little gap between spaces.

But every little bit of street parking is so sacred that they would rather force wheelchair users into the traffic lane to get by, I suppose. I have no idea how that thinking survives to this day.

Near the Port Authority bus terminal, in the rush hour, gonna-be bus passengers spill into 8th Avenue by the thousands per hour.

Well, they used to spill into the avenue, but now, since a "bike lane" has been created, they simply fill the bike lane, making it useless in the late afternoon.

Facing reality would require taking a lane of traffic from 8th Avenue. It should be added to the sidewalk on the west side of the avenue between, say, 34th and 50th Streets, or at a minimum between 30th St and 44th St.

This change would allow the crowds of pedestrians rushing to their bus connections to do so safely.

Not gonna happen, is it?

Similarly a lane of traffic should be reallocated to sidewalk on 41st St between 7th and 8th Aves. Currently the rush of commuters on 42nd St heading toward the bus terminal pushes people into the street.

Why not? "They" had a chance to consider the problem when planning the hapless "bike lane" and "they" did nothing.

I'm thinking we didn't get any progress on this problem under Sadik-Kahn, and we have about a 99% probability that the next Transportation Commish and the next Mayor will not be half as good on these issues as the ones we have now.

It's not a pedestrian paradise in the UK, but I always remember my first trip to the states when I was 12.

We were staying on International drive in Orlando, and it all seemed so strange. How could a six lane boulevard have such narrow sidewalks. They were barely 5 feet across in a sea of grass, and this was in an area full of hotels and shops.

As a 12 year old I felt I had to run like a gazelle to cross the road before the lights changed. I was living in small village at the time that had better pedestrian facilities than this big tourist centre.

Of course it all seemed so exciting at the time, but I kept getting little moments of culture shock, wondering where all the pedestrians were. It looked like we were in a big city, but no one seemed to be there.

What I remember where some lovely landscaped ares where people 'walked' usually a theme park or tourist shopping zone etc, and then a little no infrastructure beyond except for cars.

I'd like to add that there are a lot of sidewalk "encumbrances" which I'm fond of: on commercial streets, for example, stores rolling out display cases with vegetables or books or other wares to entice the passers-by, cafe tables with people sitting and watching, etc. These are what makes walking along the commercial strip pleasant and engaging. Of course there should be limits, but to ban them in the name of pedestrian access would be deeply misguided.