In January, Charlie Komanoff warned of a "Tappan Zee Death Spiral," similar to what happened to passenger rail in the middle of the twentieth century. Without taxpayer money, Charlie doesn't see a way to pay for a $5 billion bridge that doesn't involve tolls at least as high as $9 and more likely $16.

Charlie is not the first person to note this paradox. As a Merrill Lynch-led consulting team reported to the State in 2009, with any toll increase, some drivers will choose to take transit to work instead, or to work somewhere else, or both. If the tolls go over $13, Charlie predicts that so many people will avoid driving over the bridge that total revenue will not be enough to pay for bridge maintenance plus loan repayments. If the State raises the tolls again to cover those payments, that will drive more people away, which will bring total revenues down further, until the state is forced to default on its loans. 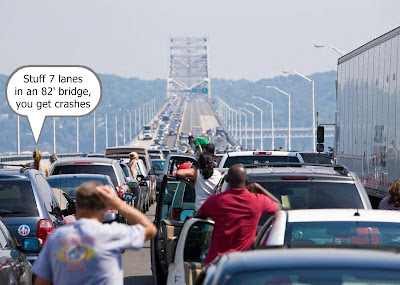 As I've written before, in any rational universe you actually want people to work closer to home and take transit more. You definitely don't want to put the state in the position of being more dependent on ever-increasing volumes of car traffic to make these payments. That's like getting your family addicted to cocaine so that you can support your own habit by dealing to them. Talk about a death spiral.

Nicole Gelinas at the Post echoes a point I made last year: that not only are the State's traffic projections bullshit, but we will probably see a decline in car volumes independent of the bridge toll levels, especially if the price of gas continues to rise.

So what would be a rational solution? Both Gelinas and Ben Fried at Streetsblog seem to be inching towards the one that I proposed back in November. What if we doubled the tolls and didn't build a bridge? Here's what seems likely:

Last week Cuomo's chief of staff Larry Schwartz gave some scary numbers about how tolls would have to rise to $12 even if the bridge is not replaced. As with transit, Cuomo and his staff are inflating the costs of alternatives they don't like and lowballing the costs of their preferred alternative. Their cost estimates include the New York Metropolitan Transportation Council's outdated and laughable projections for population, job and driving increases in the area, as well as continuation of the inefficient, homicidal seven-lane bridge configuration. Notably, the projections don't take into account the effect that tolls can have on traffic volumes.

The best thing to do would be to tear down the bridge. It's a cancer in our midst. But if nobody is willing to support tearing it down, the next best thing is to raise tolls without rebuilding the bridge.
Posted by Cap'n Transit at 1:22 AM

The Palisades Mall, on the Rockland side of the bridge, is a huge shopping destination for Westchester residents.

Did Westchester run out of space for a mall of its own, or something? Or are people in Tarrytown just being NIMBYs? I guess it's better to drive over an expensive bridge and be the traffic that everyone bitches about than to have traffic in the same minor civil division you live in.

Cash toll for the Port Authority crossings is 12 dollars. [use a sarcasm font here] Traffic has just evaporated.

Good day! I'm a reporter with The Epoch Times that covers transit. I've written about the bridge multiple times. I've also read your coverage periodically and think it should be the focus of the next story- really analyzing whether the bridge is needed or not. Could we do a phone interview later this week?