Shit we can't keep in the street

As I wrote on Sunday, if the sidewalks of Manhattan (and the rest of New York) seem crowded, it's no accident. They are now playing host to a lot of things that used to happen in the streets.

On my post from Sunday, Alai commented, "there are a lot of sidewalk "encumbrances" which I'm fond of: on commercial streets, for example, stores rolling out display cases with vegetables or books or other wares to entice the passers-by, cafe tables with people sitting and watching, etc." I agree, and I feel similarly about stoops, benches and porches. But in the commercial districts of Manhattan, many of them were cleared so that the street could be widened. I used to feel that way about news boxes and telephone booths as well, before cell phones and the Internet.

Here's some more shit that we can't keep in the street. A reader sends in this quote, from a letter he got from the president of his co-op board:

Additionally, we want to ask everyone who walks a dog to not let them defecate on the sidewalk. While we recognize that our community members cleanup after their dogs, there is still enough residue that people are picking up feces on their feet and walking it into our buildings. Those who grew up in the city are aware of a time when no one would allow the dogs to use the sidewalk as a toilet location. People walked their dogs on the street.

Like this co-op president, I remember when this sign was all over the city in its sans-serif, period-free glory: 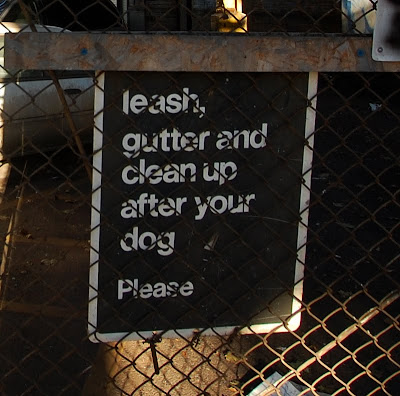 Photo: Charltonlido / Flickr (cropped)
Nowadways I find pages on the web where people don't understand the sign, because they don't know what it means to "gutter" a dog. Before everyone walked around with plastic bags, before there were pooper-scoopers, you just made the dog shit in the gutter, in between the parked cars. But then people started parking the cars too close together, and it stopped being safe or comfortable for the dogs, so now people let the dogs shit on the sidewalk. And it gets on our shoes.

Before that, people just let the dogs shit right in the middle of the street, where the horses shat.

You might be a little uncomfortable with the idea that the streets should once again play host to both children and dog shit, but these streets are actually pretty big places. On any given block there's room enough for the dogs to play in one place and the kids to shit in another. I mean, you know what I mean. And more: when my mom was a little girl, she tells me that her dog used to sleep in the middle of the street. People would just drive around her.

How did this change? Tune in again soon for more.
Posted by Cap'n Transit at 11:32 PM