Walking in our National Parks

Chuck Marohn has a nice piece about the roads in our National Parks and how they provide a good template for "country roads" - a low-maintenance conduit for cars when there is not enough commerce for a street or enough long-distance travel need for a road. I like the general direction he's taking and I'll suggest some modifications in a future post, but first: National Parks. What a disaster.

I've only been to one of the prototypical National Parks in my life. I've also been to several National Monuments and other federally managed Parklike Things, and some urban historical sites that may be National Parks in some official sense, but I'm talking about the huge rural, remote, Western places with the RVs and the bears and enormous mountains and whatnot. Well, I went to one, and it wasn't all bad, but some parts were just bad.

It was many years ago, and I was living with the woman who is now my wife, in a Western city. We were having kind of a pain in the ass maintaining a carfree lifestyle, but we were managing. We both love walking in the woods and had heard nice things about Mesa Verde National Park, so one weekend we rented a car and headed out.

We both have driver's licenses, but my girlfriend didn't feel comfortable behind the wheel, so I did all the driving. After several hours of beautiful scenery with a stop for some hearty local food, we arrived at the park.

Only then did I find out that the park restaurant was twelve miles away from the campground, in the opposite direction from the park entrance. I didn't bring any food or cooking equipment, because we had planned to eat in the park restaurant. It didn't matter how exhausted and bleary-eyed and, well, dangerous I felt behind the wheel. We had to get in the car and I had to drive for another half hour. Then after dinner, I had to drive back another half hour.

The next morning, same thing: half an hour drive to get breakfast. And then another five mile drive from the park restaurant to the attractions. Finally, the attractions were all at least a few hundred feet apart. After a day of visiting the sites, it was the same thing in reverse. And then the next day I had to schlep us all the way home.

It was frustrating for me that there wasn't any kind of transit alternative. Even though the area around Mesa Verde is pretty low density, and the park itself is uninhabited outside of staff and visitors, the staff and visitors are actually clustered along a handful of roads. It would have been relatively simple to run a little shuttle from the park entrance to the campgrounds to the restaurant and so on. But the expectation is that everyone will drive, so everyone does.

I suppose we could have taken a bus tour, but I actually hate those things. You're not just tied to some bus schedule, you're tied to the schedule of a single bus, and wherever that bus goes you have to be on it. You can't decide to linger at one exhibit, or stay an extra day at the park, and catch the next bus.

I would have liked to simply get a bus (even if there's only one or two a day) to the park visitors' center, and then be able to walk to the campgrounds, the restaurants and most of the sites, and then have a shuttle bus to the other sites.

Now you may be saying, "Yeah, Cap'n, but this is the West. Everything's all spread out there. You have to drive." Yeah, I know that's been drilled into your head for years, but it's total bullshit. What's the big attraction on Mesa Verde? 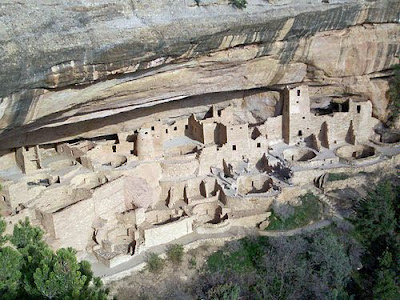 Photo: Staplegunther / Wikipedia
The big attraction on Mesa Verde is a bunch of 800-year old apartment buildings. The people who lived there - ancestors of today's Pueblo, Navajo and Hispanic peoples ("Hispanic" having a very specific meaning in this area) - didn't have cars, or even wheeled vehicles. They didn't put their dining halls twelve miles away from their residences and five miles away from the other interesting things. They had walkable urbanism.

I believe that the other 57 National Parks don't focus on human history, and that the attractions in some of them may necessarily be more spread out. For some of them, walkability may simply not be practical. I also understand that when the bulk of the park was being laid out in the 1930s and 1940s, people were thinking of cars as the future. They wanted to build the parks for cars, and they did.

But even those parks are unable to deal with cars. You regularly hear about massive traffic jams, to the point where transit systems become viable. There are now six parks with frequent transit service: Acadia, Bryce Canyon, Denali, Grand Canyon, Sequoia and Yosemite. Arches National Park is thinking of joining them. Hot Springs is already in a walkable downtown.

Still, that's only eight parks out of 58. And that's why this cutesy "subway" map of National Parks put out by the Sierra Club pisses me off so much.
Posted by Cap'n Transit at 12:47 AM

One of the reasons that people are pushing to bring back the Pioneer route is to provide rail service to several national parks as well as Boise and Cheyenne.

If you come back out west, you can take a train to Grand Canyon National Park, and there is new bus service to some of the national forests. Some of those buses are even free.

The National Park Service has become more aggressive in adding bus and van service in order to reduce the amount of parking needed at national parks. They are focusing on the high traffic parks first.

The FTA also has a program to fund transit in national parks. If you put together a proposal that respects the scale of the park, I think you will have a good shot at approval.

Estes Park has a decent transit system for RMNP visitors, as well as those just visiting the town. Ideally, routes would also be opened between Estes Park and Loveland and Longmont, so people don't have to try driving the narrow, twisty and busy Highways 34 and 36.

Of course, if you are headed off the beaten path there simply aren't enough people headed in one direction to make transit work. Every now and again I will ride along with my father over to Steamboat Springs on CO-14, and generally you can count the number of cars you see on just your hands. Heck, CDOT won't even plow the road after 6 pm because of the lack of traffic!

I find this the best example of transit frequency: When road construction occurs out here, typically the State DOT will close down one lane of the road, forcing traffic to alternate in the other lane. Oftentimes they have the habit of closing down one lane for miles at a time, resulting in a long wait between car platoons. The next time you are out here and get stuck in one of these construction zones, take a quick count of how long you have waited and how many people are also waiting. People tend to get impatient if they have to wait more than a 10 minutes or so (frequency is freedom), and if you exclude semis, there oftentimes aren't very many people waiting with you. Typically, the "break-even" point for a transit route is 20 passengers per hour. Even if 100% took transit (not going to happen), the route would still be a net financial drain.

For your reference, this is the CDOT traffic count map: http://apps.coloradodot.info/dataaccess/Downloads/TrafficVolumeMaps/TVMap1.pdf

There are four maps total, so to see them all you need to replace the number after 'TVMap_' with 2-4.

Independence National Historical Park in Center City Philadelphia is walkable! And you can get there by subway, regional rail, or bus!

A relatively new bus service, Bundu Bus, provides service from several western cities to a lot of the major western National Parks-- Bryce & Zion, Monument Valley, Grand Canyon, Death Valley, Yosemite, Grand Teton and Yellowstone. (Of course, the problem you point out is still a problem once *in* the park, but at least a few of the places listed have park transit systems.)

They're even on Google Transit, amazingly enough.