Twenty dollars, same as in town

This has been a bad week for anyone who cares about reducing car use in New York. On Friday morning, Mayor Bloomberg announced that the launch of the city's bike share program was postponed until the spring. Friday afternoon, State Supreme Court judge Arthur Engoron declared that the Five Borough Taxi Plan was unconstitutional. On Monday the Metropolitan Transportation Council voted to approve the disastrous Tappan Zee Bridge replacement project, and the state immediately applied for a two billion dollar federal loan. Today State Supreme Court judge Bruce Cozzens declared that a payroll tax that funds a significant chunk of the city's transit operations is unconstitutional.

Of course, both the MTA payroll tax and the borough taxi plan were, ah, suboptimal ways of paying for transit and providing reliable street hail taxi service to the outer boroughs. Nobody's crying for either one. If anything, we can hope that they'll be replaced by better solutions. 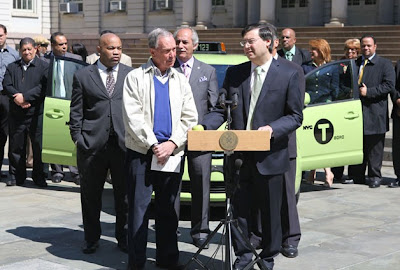 Photo: Kristen Artz / NYC Mayor's Office
Tonight I'm going to talk about the taxis. I wrote a bunch about the taxi situation last summer when the plan was being hammered out.

If the taxi plan is reborn, one thing that I hope will be changed is the pricing. The plan passed by the State set the "borough taxi" rates to be exactly the same as the current yellow taxis. I understand that it's simpler to have one system for the entire city, but it's a bad idea. I didn't want to bring it up when it seemed like a done deal, but if they're going back to the drawing board anyway, I want to put my two cents in.

There are good reasons why a one-bedroom apartment, or an Italian hero, or a haircut, costs more in Midtown, less in Forest Hills, and even less in Corona. The cost of doing business is more expensive, and the demand is greater. The same principles apply to taxi service: it's more expensive for taxis to cruise, to refuel (if they can find a gas station), and to park for breaks. There are a lot more people in Midtown willing to pay for taxi service than in Forest Hills or Corona. If the drivers could vary their prices based on location they would, but the city doesn't allow it.

I've talked about what happens in Manhattan when demand is high: shortages. There are more people looking for cabs than there are cabs, and that leads to queuing and fighting, as dramatized in this video.

When there are more cabs than people who want to hire them at those rates, the cabs will stay away. But if the supply of cabs is capped already, they will all go to where demand is highest: Manhattan.

Of course, there is still a large number of people looking to hire a taxi at a lower rate. Wouldn't it be nice if there were cheaper taxis that they could hail? The black market has provided those in the form of gypsy cabs. But there are problems with those gypsy cabs, which is why we need the borough taxis in the first place.

Since I found out that the law mandated identical pricing for the borough taxis and the yellow taxis, I've been trying to imagine what would happen. Since the yellow taxis don't meet the demand in Manhattan at the current rates, they might not meet it even with additional taxis and higher rates. There would probably be some kind of black market for borough taxis in Manhattan, like an out-of-the-way corner that's not watched by the Taxi and Limousine Commission.

In the "inner boroughs" - the denser neighborhoods of Upper Manhattan, Brownstone Brooklyn, the western Bronx and Western Queens - demand would probably match supply during rush hours, and maybe during nightclub hours, but I'm not sure about other times. If it does, there may be competition from yellow cabs. If it doesn't, it might be hard to find a borough taxi, or their might be another black market strategy to pay lower fares, or maybe even some gypsy cabs.

In the true "outer boroughs" - the areas where taxis face the fiercest competition from private cars - it will be harder to find a borough taxi than it is to find a gypsy cab now. Like I said, suboptimal.

From an efficient market standpoint, the ideal solution would be to have perfectly fluid pricing, with the fare negotiated for every transaction. From my standpoint that would suck, because even though I come from a family of Jewish businesspeople I hate haggling and find it very stressful. It would be nice if it could be all done with computers - just automatically set based on the number of people looking and the number of cabs available in a given area. Unfortunately, we're not there yet.

Stephen Smith loves to tell about the taxis in Romania, where you can tell what the fare will be just by looking at the taxi: the more expensive the car, the higher the fare. But I would settle for two fare structures: yellow and green, with the yellow ones costing (say) 150% of the green ones. Then the city wouldn't have to worry about keeping green taxis from picking up in Manhattan. They'd be free to do that - but they'd probably stay out during rush hours because they'd make more money where there's less congestion.

In any case, this setback is a chance to improve the plan. Let's take it and get the pricing right.
Posted by Cap'n Transit at 11:46 PM

I'm not convinced that the market rate for a taxi in the outer boroughs is necessarily lower than in Manhattan, given that a taxi in Manhattan can expect to spend far less of its time looking for fares (due to higher density). For a similar example, many places in Midtown and the village now offer a plain slice of pizza for $1, while in the outer boroughs the cheapest slices one can generally find are $2 or more. The higher costs of running a pizza place in Manhattan are more than offset by the economies of scale from higher demand.

You can't just look at demand in trying to set a regulated price regime. You also have to look at supply. In this case, the only flexible major factor is labor costs (a car, fuel and maintenance are unlikely to cost less in the borough situation). Given that the pay for a yellow cab driver are pretty grim ($10/hr on average after costs and tips) and those for black car services are even worse (often below minimum wage), it's unlikely that a borough taxi will be able to be cheaper without significantly sacrificing safety.

Mike, I did look at supply. I understand that it might have slipped by, but it's there in my post.

You might also have missed that I suggested, in this post and in a whole other one, that the yellow taxi fares should be higher.

I know a lot of people believe that you can improve safety through price regulation, but is there actual evidence that that works?

Also, outside Manhattan the transit alternatives are much worse, so there are demand-side reasons for prices to be higher there as well (though to be honest I think demand for taxis is pretty price-inelastic both inside and outside Manhattan).

I'm also sceptical that taxis compete significantly with private cars for single trip and habit decisions, though I guess they compete somewhat for investment decisions.