Can we have real crosswalks in New York City?

Recently I observed that the New York City Department of Transportation refuses to place signs in crosswalks reminding motorists of their responsibilities to yield to pedestrians. As David Levinson found, even in Brookline the engineers are afraid that motorists will not honor those obligations.

There were some good comments on my earlier post. Engineer Scotty argued that without the threat of a fine or jail time, drivers would not change their behavior.
Eric Fischer pointed out that many drivers already ignore stop signs and "turning vehicles must yield to pedestrians" signs, so why should we expect them to honor "yield to pedestrian in crosswalk" signs with out some effective enforcement mechanism? 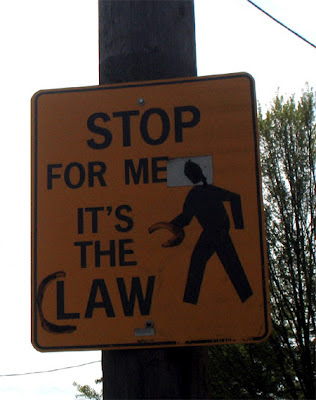 Seattle. Photo: Cherie Priest / Flickr
I agree that enforcement would help. In New York City, the Police Department and the District Attorneys like Cyrus Vance have neglected pedestrian protections to a shocking degree. I haven't written much about it, only because the coverage from Streetsblog has been so comprehensive and insightful. If you care about this issue, you should absolutely follow their reporting on it.

Obviously it would be better if the NYPD and DAs like Richard Brown gave a shit about pedestrians' lives. But would that even be enough? Levinson's post also contained a critique of the idea that such a sign (or even a few lines of paint on a crosswalk) will get us what we want: drivers who believe that pedestrians have the right of way when crossing the street, and will yield that right of way.

I think Levinson is right that marking the crosswalks would be expensive, and will not automatically protect pedestrians. On the other hand, I disagree with his suggestion to simply leave all the crosswalks unmarked, with an occasional reminder sign that pedestrians have the right of way. That is essentially what we have had at these unsignalized intersections for many years. Until recently, the entire stretch of 48th Avenue in Sunnyside was completely devoid of paint. That did not make drivers any more likely to yield, within intersections or outside.

Maybe it's not a fair example because they were comparing it with marked crosswalks on other streets, but how about this one: parking lots. It's the norm for parking lots to have no marked pedestrian facilities. Do you feel comfortable walking through a parking lot? Didn't think so.
Posted by Cap'n Transit at 11:53 PM

Let's switch roles. Officially, drivers are supposed to pull up to railroad tracks, look both ways and listen, before proceeding over them.

Of course, most private drivers do not do this. Many are even unaware of the dangers of stopping on the tracks. They demand heavy marking and signage at every railroad crossing, complete with flashing lights and bells ringing.

So it seems, the importance of markings and signage only apply when cars are threatened by something bigger.

Trains are often infrequent events, and many trains simply cannot stop in time to avoid anything, so the crossing regime for railroads makes some sense. The equivalent setup for pedestrians would be a big "do not cross" signal activated whenever a car came by, and I'm sure you'll agree that's not a good idea.

To further expand on the point of political and legal culture changing driver behavior.

1) Here in Portland, it's not just a matter of prosecutors prosecuting those who hit pedestrians. While Oregon has a "vulnerable road users" law, criminal prosecutions against motorists who kill someone only can happen if the driver was already committing a traffic crime (DWI, reckless driving, etc.); traffic infractions that result in a death may result in the infractions being upgraded to class A violations (bigger fines and a likely suspension of license), but they won't result in jail time.

However, it's enforcement of conduct BEFORE an accident that matters. The police in Portland (including the suburbs) regularly conduct crosswalk stings--an officer will cross back and forth at a crosswalk (typically one which is marked but not controlled by a signal, which means the pedestrian has a right of way), and other officers in nearby patrol cars will pull over and warn/cite motorists who fail to yield to the first officer. Motorists don't like this of course--many HATE traffic enforcement of any sort--but it seems to help with the culture.

2) It's important to note the changes in attitudes towards motorists over time. Early on, motorists and cars were unwelcome nuisances in the street, and avoiding pedestrians was strictly their problem. Lots of lobbying and propaganda reversed the situation to where the streets were seen as the domain of cars, and "jaywalking" was an offense. This has been covered in detail. While that state of affairs still exists, an important change in the other direction had to do with attitudes towards impaired driving; something once considered an unfortunate side-effect of the auto-centric society is now considered a serious crime. Likewise, more recently, with drivers using cellphones and other personal electronics.