Why we shouldn't extend Metro-North on the Hudson Line

Mid Hudson News reports that Metro-North is still no longer considering extending service to northern Dutchess County. I'm not sure who was asking, but there you have it.

Many years ago, there was a proposal to extend service past Poughkeepsie, with stops in Hyde Park, Staatsburg, Rhinecliff and Tivoli. There was significant NIMBY opposition, and I was all ready to cuss out those transit haters, but the more I looked at it, the more their objections made sense.

It was the same problem I had with the Northern Branch plan, but even more so, because the planners expected almost every rider to drive and park. None of those stations have anything resembling the walkable suburban downtowns of Englewood and Tenafly.

To generate enough walk-up demand for the service, you'd essentially need to rezone the area to create a whole new Tarrytown, Irvington, Dobbs Ferry and Hastings. Which might be nice, but do we really need that development eighty miles from Manhattan?

We need to look at what our goals are, and how a Metro-North extension might serve them. If people are driving too much in Dutchess County, replacing a small number of large lots with new walkable suburbs will not make the existing residents drive less.

There are small things we could do. Extend some trains to Marist and Hyde Park, and maybe the CIA, to capture some of the student and tourist travel. But that's a relatively small segment of the market; would it be worth running ten-car trains?

The largest existing town without train service in Dutchess County is Fishkill. Emily from IRidetheHarlemLine.com thought it was funny that someone would want to ask Metro-North President Howard Permut about restoring passenger service on the Beacon/Maybrook Line that the railroad owns, but it's not such a strange question. Of all the potential Dutchess County service expansions it's the one that would have the greatest ridership. It runs through the most densely populated parts of Beacon and Fishkill.

At this point it might not be worthwhile running trains all the way to Derby, Danbury or even Brewster, but a local group has proposed a shuttle from the Beacon Station to Matteawan and Fishkill. You could also run a shuttle from Croton, timed to connect with the incoming local from Grand Central.

The State is planning to upgrade the Hudson Line to improve Amtrak service. Dutchess County could use more intercity service, and restoring service to Pittsfield through Amenia, Millerton and Chatham, perhaps run by Amtrak, would capture a significant portion of the weekend crowd that currently drives up the Taconic Parkway.

Emily actually asked Permut about service north of the current terminus in Wassaic, and he mentioned that he was involved in planning the current service. "If I remember correctly, the rail trail was already in existence to Millerton, so we would have had a huge obstacle," Permut said. "How do you de-map a rail trail? There would have been significant opposition." More proof that rail-trails are not good for transit.

Of course, my question for Permut, which Emily did not ask, was "If you could tear down one highway in the region, which one do you think would increase Metro-North ridership the most?" Dutchess County actually doesn't have many highways. There's one interstate (84), plus the Taconic Parkway. There are some relatively short limited-access sections of Routes 9, 44 and 55.

I would probably first get rid of the "Arterials" in Poughkeepsie, a horrible plan where two neighborhood avenues were turned into three-lane segments of a one-way pair, simultaneously killing both the pedestrian environment and commerce on Main Street. I'm baffled that the arrangement has lasted as long as it has, and I can only surmise that that's because no New Urbanist has ever visited Poughkeepsie. Restoring the Arterials to neighborhood streets, and restoring Main Street to east-west traffic, would make a lot more people want to live within walking distance of the train station. Green tracks trolleys on the former "Arterial" streets would bring more people to the train without driving. 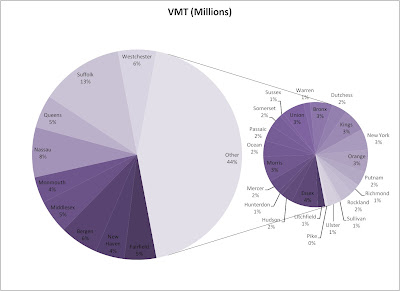 All that said, if we really want to reduce driving in the metropolitan area, it's probably better to focus on other areas than Dutchess County. According to reports compiled by the EPA, Dutchess only accounts for two percent of the region's vehicle-miles traveled. Meanwhile, Nassau accounts for 8% of VMT, and Suffolk 13%. If only they had train service...
Posted by Cap'n Transit at 12:45 AM

I visited Poughkeepsie this past May. Much of what you say here rings true; there's room for quite a bit of infill development in downtown Poughkeepsie itself, and the wide arterials ought to be first up against the wall when a sane town planner gets hold of the place. One thing I would mention is that Poughkeepsie is a beautiful town in a beautiful natural setting, with infrastructure and human capital in abundance; it ought to be able to attract commercial development, and the satellite offices and new company incubators to fill it. That would encourage Metro-North reverse peak ridership from points south, and reverse-peak is where MNRR expects to derive its growth over the next decade or two (following current patterns, really).

Later, if Poughkeepsie succeeds in building itself up as a commuter destination, then it can think about commuter rail from the north. But with today's NYC-focused commute patterns, there's no point.

While I wouldn't call myself a New Urbanist (not always down with the CNU), I lived year-round in POK for three of my four years in college with a lot of urbanist-types, albeit students. Main Street is awesome and has tons of potential, mostly fueled by exciting resident-led businesses and grassroots activism. Poughkeepsie is a place that always feels like it's on the precipice of some fundamental push forward.

I walked and biked the City and Town all the time, and indeed 44/55 is the #1 thing that needs to go...like today. There's nothing quite like crossing 50mph traffic to make your bike ride downtown stressful or unpleasant. I've met great people in the City's planning dept that feel the same way.

The fact is whatever political will exists within the Poughkeepsie area to remove the arterials will do nothing. Such a project is too expensive for this small of a city (they just barely secured the funds to turn four blocks of one-way traffic into a two way street). That means relying on Dutchess County or the State to provide funds. Other Dutchess communities would prefer to keep Poughkeepsie as their foil, that crap-hole City that you shouldn't throw money at (direct that cash to more subdivisions or (lily white) boutique towns). Plus, everyone outside Poughkeepsie who commutes using the Mid-Hudson Bridge would almost certainly flip ten shits.

All of which you could write off cause I was a college student when I lived in Poughkeepsie, and what do college kids know? Seriously, though, it's going to take either dedicated policy and political will from the top of Dutchess or State govt to remake that mess. Or some FDR-like figure who can pour federal money into POK. Otherwise we'll be stuck with that epically bad planning decision for a long time.

The development in northern Dutchess County doesn't follow the Empire Corridor at all. Rhinebeck and Red Hook are a few km inland, and Hyde Park is 1 km inland with no major street connecting it to the waterfront. Any rail extension would be necessarily park-and-ride hell, unlike the Northern Branch, which you could walk to from the towns it serves.

Honestly, it's going to be easier to serve Rhinebeck on greenfield HSR from New York to Albany when that gets built. Still isn't going to be downtown, but it could be closer than Rhinebeck, following mostly flat streets rather than the steep climb out of the water level.

I would have to disagree with your comments about a Metro-North Hudson Line extension. The market is definitely there. It was there 15 years ago when the idea was first introduced, and it is there even more so now. A lot of the residents are different now than 15 years ago in particular, people relocating after 9-11. A lot more people commute to NYC from the greater Kingston area than you think. The main obstacle to a Metro-North expansion, and the real reason they are no longer, or should I say currently pursuing, is they have absolutely zero funds to do it.

But you do make some good points about the traffic in those small villages. The problem would be the location of the train stations itself. Instead of building stations in Staatsburg, Rhinecliff, and Tivoli, you should have one hub station directly after the Kingston-Rhinecliff bridge i.e. Barrytown, to limit traffic in the villages themselves. Throughout northern Dutchess could take the major roadways to get to the station, instead of disrupting the peaceful balance of the villages. A LOT of people commute via Metro-North already from northern Dutchess and Northern Ulster. This would take cars off of Poughkeepsie roads, and reduce the nightmare traffic during rush hour on the Mid-Hudson Bridge. The weekenders alone are worth the extension. There is Long Island Rail Road service from Manhattan all the way to Montauk, and that is pretty much equidistant from Manhattan to Albany. The market for extension is there, there is just ZERO funds to do it, so it's a moot point.

Why do you hate the Poughkeepsie Arterials so much? I think they are a clever alternative to the usual approach, razing neighborhoods to build a highway. They allow nearly-as-fast passage through the city and keep cars off Main Street, making it a better place for pedestrians. I would probably like to see them cut to two lanes, with one side restored to parking. But I don't see a need to remove the arterials at all. The impotent "highway" section of Route 9 is far more offensive.

A hub station would be a nightmare. Better to build the four planned stations but place them slightly outside the towns themselves (Tivoli, Rhinebeck, Staatsburg, Hyde Park) with new dedicated access to roads Route 9. Of course any mention of the word "bypass" is anathema on this side of the river.

By "dedicated access," and "take the major roadways," of course you mean by car, Salvatore and Ahmed? No. The whole point is that northern Dutchess County is way too car focused, and people should be able to walk to the stations the way they can in Westchester and southern Dutchess. If there's nothing within walking distance of the trains, we should build something. If we don't build any new villages, we should build a new train line that goes through the existing villages (Rhinebeck, Tivoli, etc.).

And to respond to Alon's suggestion, I don't think this line has to be high-speed rail. It could be a branch from Poughkeepsie.