I would like to find the one magic bullet that would make our streets safe again. I would love it if my kid could play in the street the way they did when my mom was a girl, but at this point I'd settle for him (and me) being able to just cross the street without a serious chance of being injured or killed. 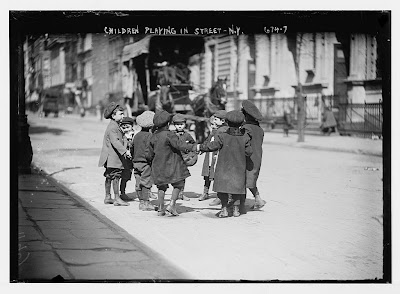 Children playing in street, NYC, early twentieth century. Photo: Bain News Service
The thing is that I can't come up with a single magic bullet, because there are multiple factors involved: vehicle speed, driver inattention, driver entitlement, low visibility. There are numerous changes that have gone on since the picture above was taken that have increased the danger on our streets. The most obvious is that horse-drawn carts and carriages have been replaced by cars, and the cars have been "improved" to the point where they accelerate faster and reach higher speeds. As they have been outfitted with more comfort, better windows and better sound systems, drivers have become more insulated from the outside world. Cell phones, music and food distract them from the street.

The law plays an important role. In his book Fighting Traffic, Peter Norton describes changes in the laws that gave priority to drivers and placed the fault of a crash on a pedestrian who was outside the crosswalk. Sarah Goodyear has a nice summary. The police cooperated, to the point where at least once a week Streetsblog has a post on a crash where a pedestrian or cyclist is killed or severely injured, but the NYPD undermines or blocks the course of justice.

But it wasn't just the cars that allowed drivers to go too fast for safety. The streets allowed it too. Even before the automobile was invented, there was a fad in North America for wider streets. Nathan Lewis calls it "19th Century hypertrophism." It included a number of arbitrary criteria, such as that a carriage driver had to be able to turn a team of horses around in the main street.

This width gave drivers lots of room to maneuver around each other and around streetcars and other things in the road. They responded by driving at high speeds; this is played up in the 1928 comedy "Speedy," which features lots of great location scenes in New York streets; here's a clip where taxi driver "Speedy" (Harold Lloyd) gives Babe Ruth a ride to Yankee Stadium.

The nice thing about having so many factors involved is that it gives us lots of options for rolling them back and regaining safety. Of course, with so many factors, any one of them is almost certainly not going to do enough.


Those aren't the only factors. If they were, I'd be discouraged because so many of them are politically difficult. In a future post, I'll talk about parking. In the meantime, what do you think of these?
Posted by Cap'n Transit at 1:00 AM

Cars and car-oriented development should be treated as an addiction, like cigarettes, and addressed in the same way -- with a massive public relations campaign designed to ensure that no one remains unaware of their ill effects.

In order for this to happen, the professional architecture and planning associations would have to issue high-profile warnings and recommendations in this regard. There would have to be a way of publicly discrediting professionals in those fields who design projects and neighborhoods that are oriented toward the car.

Nathan Lewis has done humanity a great service with his Heroic Materialism/Traditional City series. But I think lately, in his articles on how to accomodate cars and parking in a new kind of suburb, he has got on the wrong track. Rather than using all sorts of architectural tricks in order to provide 2 parking spaces per dwelling, it would be better to educate the public not to want those 2 parking spaces, and to prefer the narrow, pedestrian-oriented streets that he describes in earlier articles.

There is a silver bullet: remove cars.

You have a brilliant ideas, but these suggestions have not worked anywhere I know.

Your ideas can be summed up to either enforcement (laws) or auto design.

The latter is a really hard sell plus we'd have to retrofit things.

The thing that works the best, is actually engineering.

Narrower roads work better than speed limits, the latter are totally ignored on the average.

Look into "Sustainable Safety" and you'll see the start of many brilliant ideas on how streets were made seven times safer and how they are trying to eventually have no fatalities.

This ought to be one of the most totalitarian, angry posts on this blog so far. The comments I read are yet another proof how I, being a reasonable person in favor of multiple options for transportation (that includes transit and private transportation), should keep voting for politics with far more populist instances just because there is a bunch of "road-mongers" trying to see the idea of private automated transportation as some sort of disease.

3sigma, allow me to direct you to the very first post on this blog.

If accepting high levels of death, pollution and resource waste is your idea of "reasonable," there are plenty of other blogs where you can find such people.