How many Jakriborgs is that?

Earlier this year, the Small Streets Blog introduced us to the planned community of Jakriborg, founded in 1990 on 12.5 acres of farmland between the cities of Malmö and Lund in southern Sweden, next to a frequent commuter rail line and a bus stop. It has "parking on the outside," as planned for the Piscataquis Village Project in Maine, but there are very few - I count less than a hundred spaces for a population of over 500 families.

Building on my post criticizing park-and-rides, the Small Streets crew imagined replacing part of a park-and-ride with a dense, walkable village like Jakriborg or the Czech town of Telč. They astutely observe that if you build at Jakriborg densities, you get more riders than if you used the land for a park-and-ride, and these riders all live within walking distance of the station.

Phil LaCombe from Small Streets takes the example of the park-and-ride in Greenbelt, Maryland, which holds 3,399 parking spaces. Those 37 acres can fit almost three Jakriborgs, which can house over 4,000 people in total, including children. That's a net gain of 701 people over the park-and-ride. If the 701 additional people are children they probably wouldn't pay taxes, but their parents would pay taxes and shop at the local stores.

Inspired by Phil, whenever I see a large parking lot near a train station, I think to myself, "How many Jakriborgs is that?" The Metro-North parking lot at Croton-Harmon is 1.3 Jakriborgs, I believe. The parking lot planned for the North Tenafly station on the Northern Branch is 0.68 Jakriborgs.

I thought of this today when I read that the New Jersey borough of Dunellen has been accepted into the state's Transit Village incentive program. Acceptance is based on a detailed application where the municipality specifies land within a quarter mile of a transit station that can be developed into walkable housing and shops.

It would be really nice if the state put all of its accepted applications up on its website so that we could see what's being planned. We could then monitor the progress of the various municipalities and see how much they live up the the hype. No such luck.

Mayor Robert Seader, however, specifically mentioned the 19-acre Art Color site, a printing plant right next to the train station that was abandoned in 1968. That's a Jakriborg and a half right there. 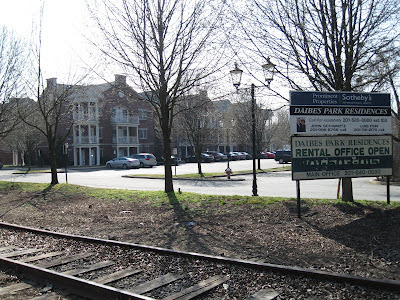 All across New Jersey I've seen shitty "condo" developments where you can't go anywhere without walking across endless parking lots, like this garbage across the tracks from the planned North Tenafly parking lot. That's not transit-oriented, and its walk appeal is zero. With no train service I can kind of understand them building these parking lots, but otherwise no. I hope that whatever goes in the old Art Color site is more like Jakriborg and less like Daibes Park Residences.

Another quick note: Dunellen was originally formed from the township of Piscataway. Piscataway, in turn, was founded by Quakers and Baptists who didn't want to live under the Puritans along the Piscataquis River in Maine. So if Dunellen builds a Jakriborg-type carfree village with small streets on the Art Color site, it could end up being a Piscataway Village Project. And as I said, Really Narrow Streets need good trains. Of course, then it would help if the Raritan Valley Line were as frequent a train as the line that serves Jakriborg.
Posted by Cap'n Transit at 12:12 AM

Just out of curiosity, I looked up the train schedules for Dunellen and Hjärup. Dunellen has an all-day hourly service, while Hjärup has a half-hourly local train to Malmö and Lund. So Dunellen is not that far off, actually, and Dunellen is considerably further out than Hjärup from its respective city. At the same distance as Dunellen, it the train frequency also drops to hourly due to lines splitting and short turns and such.

This would be an excellent example of government-sponsored transit ignoring the value of the land it builds on to provide a service.

How much could MTA sell the land for its park and rides? For how much could it lease the land? And how much extra fare revenue could it collect from its lessee riders?

Thanks for linking to the Small Streets Blog!

It's worth saying that it used to be common sense that you'd build a town next to a train station. What an age of excess we live in to instead pave over the 35 adjacent acres of land, invite people to drive there alone from tens of miles away, and call our scheme "environmentally friendly."

In the American suburban scenario, how does a commuter rail agency serve riders that live beyond walking distance to the station if bus service is not feasible? Should commuter rail agencies provide parking at all, even at market rate? I'd love to see more development that is truly transit-oriented, but I suppose then that commuter rail agencies will have to make the conscious decision to ignore its driving customer base.

Ultimately, it would be ideal if commuters could be located near enough to walk to a station. In the interest of compromise, though, I think that the best places to put park-n-ride style stations are at nodes where the railroad line intersects a major highway.

First of all, these are probably already locations that are desolate thanks to the highway.

Second, park-n-ride stations generate extreme peaks of automobile traffic. If built on local streets, they flood those streets with traffic twice a day, repelling local residents. However, a ramp directly to the highway doesn't have these issues.

Third, lots of folks will be coming along the highway anyway, so this simplifies access.

So I would argue for removing parking capacity from downtown, potentially walkable stations, and moving it close to the highway nodes where people are not going to want to live anyway.

But I'm open to comments and other ideas on this.

Arcady, New Jersey is .. um... unusual. A block away from the train station there's a bus to the Port Authority Bus Terminal once an hour all day long. I'm not in the mood to go parse bus schedules but the bus to Bridgewater also stops in Dunellen so it may be once every half hour. So people in Dunellen who want to go to Newark or "downtown" Manhattan take the train. People who want to go to Midtown take the bus.

... and working from Wikipedia entries.. Dunellen is slightly denser than Hjärup. Dunellen incorporated in 1887. I doubt they had automobile oriented development in mind. Jakriborg is a New Urbanist Tudobethan wet dream, winding narrow lanes etc. Dunellen is a New Urbanist Victorian wet dream, gridded access to "downtown" etc. It's a pity ARC was cancelled, Dunellen would have one seat ride to Penn Station in New York. Unlike it's two seat, change trains in Newark, access it has now.

Appreciate the link to Piscataquis Village Project. Also very happy to see some more lively photos of Jakriborg posted by Phil Lacombe. Minor technical correction - I believe the original inhabitants of Piscataway,NJ came from the area around the Piscataqua River which forms the border between Maine and New Hampshire. It's that river's bridge where most Mainers going north heave a sigh of relief on as they cross. The Piscataquis River is in central Maine.