I remember when I visited Massachusetts for the first time as a teenager. I stepped into a crosswalk with no traffic light and prepared to wait for the cars to pass, but they stopped and let me cross first! I was pretty amazed. A few years later I went back to a different town in Massachusetts, and they did it there too!

I started thinking about how great it would be if drivers did that everywhere, but here's the kind of jackassery we had to deal with in New York State at the time: 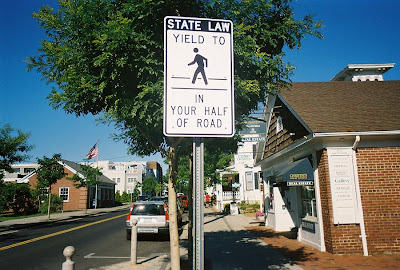 Photo: DanTD / Wikipedia
You must yield to a pedestrian, but only if they're in your half of the road! With that kind of wishy-washy law in place, I figured that nobody would ever bother to figure out if I was in their half of road, and sure enough they just cruised on by.

But then lo! The State Legislature passed a law making our crosswalks equal to those of Massachusetts and New Jersey. No more of this "IN YOUR HALF OF ROAD" bullshit.

That was the time that I really could have used this law, because I moved to Queens right around then. Most of the intersections here in Queens are what they call "unsignalized," where two streets cross and only one has stop signs. If there are only cars, the cars on the street without signs just cruise right through while the drivers on the other street stop. If pedestrians try to cross a street without stop signs, the drivers just barrel on through the same way. You can wait five minutes at one of these crosswalks during rush hour.

With this law, though, I could just step into the crosswalk and they'd have to stop! But what counts as a crosswalk? Unlike the crosswalks in, say, Great Barrington, there was no paint in some of these intersections. None. If it doesn't have the zebra stripes, do drivers have to stop?

According to the law, they do. In New York State, if there's a line of sidewalk broken only by the street, then the space in the street where the sidewalk would be is a crosswalk. It doesn't matter if there are zebra stripes or no paint at all. The only thing that can make it not a crosswalk is one of those signs that say "NO PED X-ING."

With that in mind, I promptly marched up to the unsignalized intersection on my corner and started to cross. The driver didn't stop. I was smart enough to pull back before I got creamed. It was clear that just changing the law was not enough.
Posted by Cap'n Transit at 12:31 AM

Ha! In Mass they do sometimes stop, which is amazing when it happens, but they often don't stop either. Had two close calls just yesterday, in crosswalks. One on Tremont St in the South End, with a woman speeding and braking at the last second. And then one in Cambridge near Central where some dude just rolled right through a stop sign and nearly over my toes. I'm pretty accustomed to seeing crap like this by now.

Another complication with this law is in places where there are no sidewalks. According to our local police department, crosswalks cannot be installed unless they connect with sidewalks.

All of these little complications add up to an environment where the only rational choice is to drive. Unless of course you don't own a car, are too young or old or infirm to drive. Hence obesity, pollution, and all those other effects.

Can you link to the law that says that a crosswalk exists (even unstriped) if the street breaks the path of two sidewalks? I've never heard of this before. Thanks.

When a state passes a law applying to the rules of the road, it should be an obligation to communicate it to all drivers and registered voters. Unfortunately, they do not do so (in any state, to my knowledge).

Here you go, Amateur! "That part of a roadway at an intersection included within the connections of the lateral lines of the sidewalks on opposite sides of the highway between the curbs or, in the absence of curbs, between the edges of the traversable roadway."

I don't understand what "Your half of the road" even means. My initial reaction was that it was a pro-ped message: in the half of the street that's for cars, you still must yield to pedestrians.

Alon: Only half the right of way being for cars would be quite a pedestrian friendly area indeed!

Theres a cultural factor here. In Berkeley I could mostly cross the rather large road in front of my apartment easily most of the time (no stop sign for the main road), people would stop and let me cross. People are a lot less charitable in Oakland though....

Oregon's crosswalk laws and 'driving culture,' I guess you'd call it, were excellent. When I was living in Portland, I was amazed by how apparently embedded 'yield to pedestrians' was in the vast majority of the drivers there. Particularly coming from North Jersey as I did. When I visited family in NJ over those years, it would take about three days on either end just to adjust my 'walking style' back to the local norms.

Now that I'm back east, I actually think Philadelphia drivers are more apt to stop for pedestrians than either NJ or NY drivers (I'm surprised at how easy it is to cross York Street east of Frankford Avenue here in Kensington, it's almost Portland-y!), at least according to my totally unscientific survey of the sense I generally get while walking around, but the culture is definitely way behind that of Oregon's.

Alon, the law at that time was that in streets with more than two travel lanes, a driver was only required by law to yield to a pedestrian if the pedestrian was in the half of the road that the driver was driving on.