When overnight curbside parking was illegal

There's a quote that's been floating around the net for a few weeks: Manhattan banned overnight curb parking until the 1940s. Ed Glaeser quoted an ITDP report (PDF) by Rachel Weinberger, John Kaehny and Matthew Rufo, who attributed it to Peter Norton's book Fighting Traffic.

I've heard good things about Norton's book, but I haven't yet read it. However, I was able to get some of the story from the New York Times archive, and it's a fascinating one. To begin with, yes, it was originally illegal to leave a car parked on the street overnight, the same way it was illegal to leave any of your personal property in the street.

When people drove carriages and carts around, of course, they tied them up in the street. So during the day, street parking was allowed. If you had a horse and carriage, however, you didn't leave it on the street overnight. The horse could easily be stolen, and was vulnerable to bad weather. City dwellers kept their horses and carriages in carriage houses, like these in Greenwich Village: 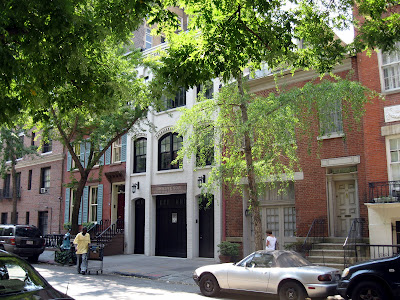 If your family history has stories of Great-Uncle Shlomo working long hours as a tailor to start his family on the Lower East Side, you can bet that Shlomo didn't have a carriage house to go with his fifth-floor cold-water walk-up on Rivington Street. Carriage houses were for two classes of people: those who needed them for work, and those who were wealthy.

To be honest, the only reason I can come up with is simply that the streets are public common spaces, not intended for the free storage of private property. And that of course leads to the question why it changed. If you think about it, it is kind of bizarre that the city devotes a sizable chunk of its public land, and a significant portion of its transportation and policing budgets and personnel, to helping people (roughly speaking, the second-wealthiest quartile of the population) to store their private property free of charge.

Reading the Times archive, it's clear that nobody in city government ever intended to do this. It was a fascinating combination of popular revolt and political chicanery - and it's even possible that the revolt was manufactured and it was all chicanery. Stay tuned for details.
Posted by Cap'n Transit at 12:23 AM

thansk you fo that story... it was evolutionary that may be why is now so diffcult to turn back the clock... or we need to start steeling the cars again :)

In Brookline, MA it's still illegal to park on the street overnight, but I think it has very little to do with discouraging auto use and very much to do with rich Brooklinites not wanting Boston students parking on their streets for a month at a time.

Forbidding overnight parking does seem to be pretty standard in many suburbs. I guess it's a one of those feel-good things about making the streets seem more tidy.

The response to overnight car parking by some cities was to add parking meters (which is pretty effective). Many cities still ban overnight parking, though.

If the carriageway is excessively wide for the needs of traffic, as many American residential streets are, you may as well park cars along it. From the city’s perspective, it is maintaining the right-of-way regardless, and allowing overnight parking along it may increase the value of surrounding homes at no additional cost (especially in older neighborhoods where no off-street parking was initially provided).

Although I haven't seen it myself, my friends from Providence, Rhode Island say that the banning of on-street parking has had an unforeseen consequence: the paving over of all green space on private property. So more curb cuts putting cars on sidewalks.