What is New York's Forest Hill? 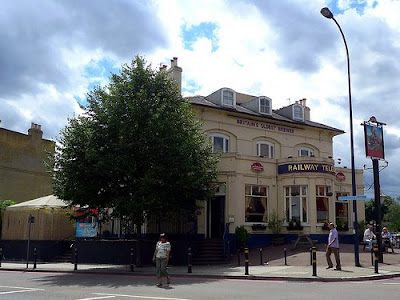 The Railway Telegraph pub, Forest Hill, Lewisham. Photo: Ewan-M / Flickr
In the comments, Benjamin Himric pins Feargus down to the following "independent variables" (my terminology) for distinguishing urban and suburban:

URBAN
- relatively high density
- mixed use district (i.e., not overwhelmingly residential)
- close to the city core (presumably this refers particularly to areas that are not themselves mixed use)

So can we put numbers on these criteria? Let's take a look at the London Borough Profiles, using the boroughs of Hackney and Lewisham as proxies for their neighborhoods of Shoreditch and Forest Hill:

I added in some dependent variables, using the OECD's purchasing power parity multiplier of 0.76 to convert the British prices and wages into something meaningful here. We can get a map of New York neighborhoods and their densities from the Department of City Planning. Quiggyt4 on Flickr has a map of jobs density. The New York Times has a map of income, and Trulia has housing price maps.

Looking at our dependent variables of density, mixed use and distance from the city core, there are only three New York neighborhoods that have 50-74 people per acre and are less than fifteen minutes from one of the two job centers: Fort Greene, Williamsburg and Woodside. Of the three, Fort Greene is the only one that's really mixed use, meaning that they have jobs that aren't just there to serve nearby residents, and that's only if you add in part of Downtown Brooklyn. It also has the right income mix and the projects to be the Shoreditch of New York City.

So what's Forest Hill for New York City? Sadly, it's not Forest Hills, which is much too dense (63 people per acre). More likely, within the half hour limit if you take the railroad, are Greenpoint, South Jamaica, East Flushing and Hollis. They're significantly more residential than Fort Greene or Williamsburg. Greenpoint is probably the best candidate for an analogue to Forest Hill.

Interestingly, of course, Greenpoint is the one New York neighborhood that Feargus mentions, and it's in his list of "currently hip city neighborhoods anywhere." I guess that just shows that "suburbs" - of any kind, really - aren't immune to gentrification. People got priced out of Williamsburg and they went to Greenpoint.

Another thing I noticed is that I couldn't find any neighborhood that had incomes and prices comparable to those in London, at similar densities. As you can see on the New York Times map, income levels in New York form a donut; once you get past the Van Wyck Expressway, or Van Cortlandt Park, or the Watchung Mountains, income levels rise the further you get from the city. There may be some cheap, low-density neighborhoods in New Jersey; I'll check that later.

I have read similar "Why I moved to the suburbs" stories that take place in the New York area, but the commutes tend to be significantly longer and the housing quite a lot more expensive. It's interesting that in London, the suburbs are still a bargain.
Posted by Cap'n Transit at 1:09 AM

Off-topic: it's interesting that in the suburbs, even the rich ones, the job centers are poorer than the residential-only areas. Look at Dobbs Ferry, White Plains, and Stamford.

@Alon. Do you mean the job center of downtown Dobbs Ferry? It is pretty small. And yes, it is poorer. But that is changing as more developers start eyeing its Main Street. Look at the new condos in downtown Hastings-on-Hudson. Also, old zoning codes made many apartments above stores illegal. New zoning codes encourage them.