Who's getting out of the way?

When you look at the maps for the "parking and traffic mitigations" near the proposed stations along the Northern Branch (PDF), you'll see little bus bays like this one in Tenafly: 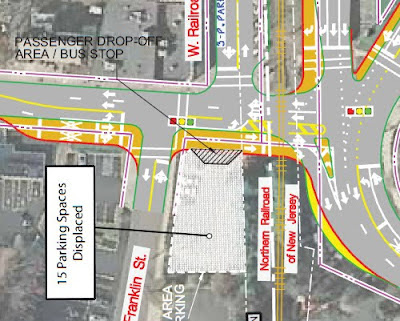 Or these in Leonia: 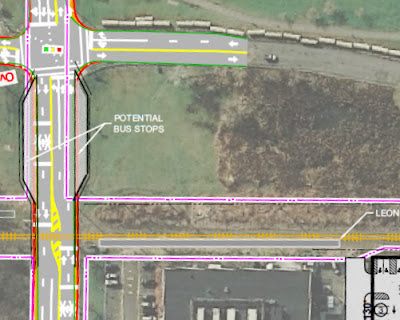 You might think, "Oh, how nice! Infrastructure for buses." In fact, I once saw on the web where these bus bays were presented to bus riders as one way to improve their commute. (I wish I could find it now!) But just because someone designs infrastructure for you doesn't mean that the goal is to help you. It's like that old science fiction story, "To Serve Man."

Bus bays in fact slow down buses quite a bit. It's a very similar situation to a street with curb parking everywhere except the bus stop. If you've been on a bus trying to pull out from one of those stops into rush hour traffic, you know exactly what's wrong with bus bays. The only places where I think they're at all warranted are stops on high-speed roads like Route 4 or Route 17 in New Jersey, where there's a real chance that some texting driver could rear-end the bus.

These proposed bus bays in Leonia and Teaneck are not that kind of traffic. They have no protective purpose; their only reason for being built is so that the buses can get out of the way of private cars.

Bus bays do so much to slow buses down that where bus riders have some political power, the government builds the opposite: bus bulbs. They allow buses to remain in the flow of traffic while picking up passengers in a street where there is also curbside parking, like First Avenue in Manhattan.

It's a similar situation with pedestrian overpasses and underpasses. People propose them like they're God's Gift to Pedestrians, but they're really about getting pedestrians out of the way of cars.

That's why when someone proposes a new kind of infrastructure that you haven't heard of, especially one that separates uses, you should ask yourself who's getting out of the way. Who's being inconvenienced? Very rarely, the safety justifies the inconvenience. Examples include the bus park-and-ride on Route 17 in Ridgewood, and pedestrian overpasses across bona fide high speed limited-access highways, like the Long Island Expressway. In everything else, as Ottawa planners know, transit users and pedestrians should come first.
Posted by Cap'n Transit at 12:20 AM

These bus bays would also make sense if these were timepoints and the buses were laying over there for a timed transfer to the rail line.

Funny, just yesterday while riding one, I was just thinking about how nice it is that the CoachUSA buses don't pull into bus bays on Rt 93. So they're going to build some? And probably charge it as a "transit improvement?" Sigh.

In this post I think you have indirectly hit on the big problem in the design of many higher speed public transit projects(express bus, Class I BRT and other private right-of-way transit - heavy rail or light rail).

Put simply, there is no coordinated planning (including capital and operating costs) for a fully integrated network including feeder buses or the integration of existing bus routes. Thus, one often sees bus stops near these routes that are either poorly designed from a bus operations standpoint (for either through routes and/or layovers), awkward/potentially unsafe from a passenger connection standpoint, or too small for local bus needs.

From my city, the home of the Transitway, and while I still remain a BRT skeptic, I am nevertheless pro-BRT and see BRT, regardless of whether or not it is a bus in mixed traffic, as complementary with rail.

The poor must go slower so that the rich may go faster.

Same as it ever was.