Why we can't have real crosswalks in New York City

As I wrote the other day, Queens is full of "unsignalized" intersections, where one street has a stop sign and the other has none. Practically speaking, pedestrians have no rights at all when crossing at these intersections, even though under the law we have the right of way.

Since around 2003, New York State law has said that cars must stop for pedestrians in crosswalks. Under the law, a crosswalk is "That part of a roadway at an intersection included within the connections of the lateral lines of the sidewalks on opposite sides of the highway between the curbs or, in the absence of curbs, between the edges of the traversable roadway." So you know that piece of pavement in between the sidewalks, with no markings on it? Yeah, that's a crosswalk. 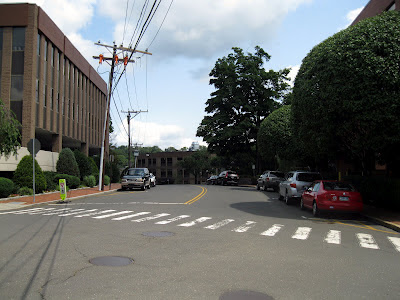 This one is in New Canaan, Connecticut, but I've seen them in other places, including towns in New York State. 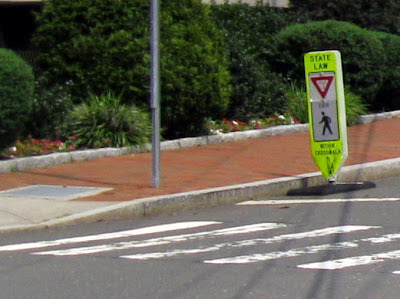 So why can't the New York City DOT just put them out in every unsignalized intersection in Queens? A neighbor of mine asked them to put one on his corner, and they said that it was "not warranted." That's a technical term in traffic engineering meaning that the conditions aren't right for it, but what are the "warrants" for one of these?

My understanding is that traffic engineers are afraid of being blamed for a pedestrian getting hurt or even killed. They imagine that someone will see the sign, think that they're in Northampton, and try to cross the street. Crazy New York drivers will try to run them off the road, but the pedestrians will stand their ground, because, you know, the sign. And they'll get hurt and it'll be the engineer's fault.

Now I know what you're thinking. You're thinking, "these engineers care whether pedestrians get hurt? Really? Then why the FUCK don't they care about deathtraps like Brighton Beach Avenue and West Street? Why do they keep widening roads and taking away parking lanes?"

LOS stands for "level of service," and it refers to how smoothly traffic is flowing. Most of the shitty, dangerous road designs you've had the displeasure of experiencing are justified by maintaining a good LOS. The LOS is designed for highways, so it says nothing about pedestrian throughput, safety or comfort. And that means that if pedestrians get killed on Northern Boulevard, everyone up to Janette Sadik-Khan says, "well, it's a shame she had to die, but at least she gave her life for the LOS." No matter how many pedestrians die, the LOS will protect the engineer's reputation. And that's why we can't have real crosswalks in New York City.
Posted by Cap'n Transit at 9:49 PM

You probably already know this, but the federal MUTCD doesn't specify what the warrant is for these signs (R1-6, http://mutcd.fhwa.dot.gov/htm/2009/part2/part2b.htm) and leaves it up to state and local agencies.

New York State (https://www.dot.ny.gov/divisions/operating/oom/transportation-systems/repository/B-2011Supplement-adopted.pdf) also doesn't say anything except that the "yield" form should be used instead of the "stop" form.

if someone gets killed and the media jumps on the incident they will try to find a scapegoat. if the intersection was just modified then they may blame the traffic engineer and call for him/her to be fired on the evening news

so you do the safest job you can. to keep your job

While the engineering profession probably shares some blame--in general, because it has long focused on moving cars rather than anything else--the real issue is contained in this sentence:

"Crazy New York drivers will try to run them off the road..."

No amount of signage is going to protect pedestrians in a political and cultural environment where motorists feel like they own the roads, and are allowed to mow pedestrians down with impunity. Probably nothing short of a signalized crossing will work--and maybe even that won't work, once motorists figure out that they aren't gonna be T-boned by a semi if they run a particular light.

The primary roblem is not in JSK's office. The problem lies with the DA's office, and with the police, and the entire apparatus of law enforcement--which seems to think that pedestrians or bikes being run over and killed is not a problem, because they are where they ought not be.

Portland's got plenty of those signs lying around, and marked crosswalks, too. But Portland motorists are, for the most part, trained to yield to pedestrians. Accidents happen here, of course, but are more likely to result in prosecutions.

What will start to change hearts and minds--is a parade of dangerous motorists heading off to Riker's Island.

Signage, by itself, isn't likely to do squat.

EngineerScotty, I'm a bit more optimistic than you. Because, well, how would the drivers know that they aren't supposed to own the roads if they don't see signs to the contrary? Put enough of those signs out, and enough angry pedestrians, and maybe the culture of motorists will start to shift slowly. And maybe the law enforcement culture will start to shift too, because so many cops spend so much of their time behind the wheel of a car and generally identify with motorists more than any other group of road users.

Arcady, I wish that was true, but if a sign is too common, people just become blind to it instead of reading it more often. Around here, "turning traffic must yield to pedestrians" (R10-15) and even "stop" are pretty close to invisible. Red lights probably only work because drivers know they are likely to get run into if they ignore them. I do think constant, visible presence of aggressive pedestrians helps, though.