Buses or trains on the Northeast Corridor?

On Sunday I posted about setting goals and working through disagreements. One area I had in mind was the Northeast Corridor. We currently have 86% of trips, or 137 million per year, going by car or plane, and I asked what it would take to flip that so we have no more than 14% of trips, or 24 million, by car or plane.

My original thought was that with so many passengers traveling through New York Penn Station, and the often-repeated claim that the North River Tunnels leading into Penn being maxed out, any increase would have to be in buses. In the comments, Alon convinced me that there is capacity in the tunnels, and that Amtrak can move more passengers by running longer trains, improving signaling and increasing the number of seats per train. Increasing the number of seats may be counterproductive, because it will lower the quality of the experience and thus limit what Amtrak can charge for a seat. 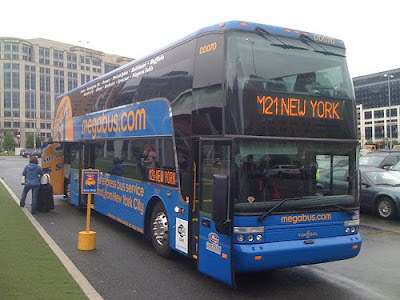 Photo: MattHurst / Flickr
The question then comes down to a strategic issue. Which is likely to get more people out of their cars, improving signaling and increasing train length, or increasing the number of buses? It's a little more complicated, though, because the strategies are unequal in various ways. It might be better to ask which gives you the biggest bang for the buck, but it's not all about money. Which strategy gets the largest number of people out of their cars per hour of activism?

Signal improvements and train cars are fairly straightforward because there's no constituency that feels threatened by better train signals or longer Amtrak trains. There is only the constituency that wants to deny Amtrak funding. Activist hours would simply be spent fighting for that funding.

In contrast, there are constituencies that are opposed to various ways of providing more bus capacity. The intercity bus companies seem to be able to buy new buses with fare revenue and maybe even build terminals in other cities, but they don't seem to have enough income to build their own terminals in Manhattan, so any indoor terminal or garage would have to be built with public funding.

Up to now, intercity buses have expanded on the cheap by simply using curb space. This has fueled the explosive growth in this sector of the market, but by enabling "community review" of bus stops and other onerous requirements, New York City has put the curb out of reach of many intercity operators.

That leads us to the final set of questions for tonight: Given the new law, how can we continue to expand intercity bus service in the Northeast Corridor? What is the best use of activists' time? Would an hour spent on bus service get more people out of their cars than spending an hour lobbying for longer Amtrak trains and better signals?
Posted by Cap'n Transit at 9:48 PM

A little off topic, but one thing to remember when talking about the tunnels is that the dead end tracks at PSNY are another constraint on capacity, because at some point you have to try to get NJT trains back out of those tracks, and they have to cross opposing traffic at A interlocking.

I may write a full post about this, but the crib notes are that buses don't have the capacity to handle this demand. The intercity expressways do, but once you leave the expressway and make stops, you need enormous space for parking buses, like at Port Authority. The express bus companies can get away with curbside pickups because their traffic volumes aren't all that great. And the higher the volume, the more buses need to venture on city streets to find appropriate pickup and dropoff locations, which means more getting stuck in never-going-away city traffic.

Forget about it. France and Japan don't have very developed networks of intercity buses, but South Korea does, and their mode share isn't that great.

@Alon
What if you don't assume all buses start/stop in Manhattan? You could spread a large set of stations all over the metropolitan region; which would not be unreasonable if you assume the travel volumes cap'n would like to see.

@ant6n: The problem with that is that Manhattan is the only place in the metro region with easy, convenient access to everywhere else in the Tri-State area. The outer boroughs have very poor transit connections to each other, not everyone can afford to drive or get a taxi to their final destination, and to get to Queens and Brooklyn it's easier(and cheaper) to drive through Manhattan. Ending in New Jersey would require a transfer for most passengers to PATH and then the subway, and Westchester, Nassau, and Connecticut are simply out of the question.

Is this an issue of adding extra trains for the NEC regional Amtrak trains, Acela, or both? In the chart found on my own post (http://betterinstitutions.blogspot.com/2012/09/why-would-we-want-to-privatize-one.html) we can see that the regional trains earn an operating profit of about $3.76 per rider, whereas on Acela they earn $56.78 per rider.

So if it's Acela, the issue of adding more trains seems straightforward. Basically, pump all the capital-dedicated money into Acela trains and you should have the money paid back pretty quickly: a capacity/ridership increase of 20% gets you an extra 700,000 riders a year, which yields you $40 million. That strikes me as enough to pay for a lot of trains, especially since you probably wouldn't be expected to pay the full cost of all the extra trains in the first year. And if Amtrak can't convince any government entity to pay for it, this sounds like a great investment for a private lender since it's pretty much a sure thing to make money.

Queenstransit: great map! Looking forward to the version with dollar and Chinatown vans. I agree with Ant6n, and will address your point in a future post.

Shane, in theory if you provide more seats and the demand stays constant, the price per seat will go down. But the demand may well rise to meet the supply, especially if Christie runs out of political will to expand the Turnpike or gas prices go up.

I'm implicitly assuming a distribution of New York-area stops that includes a variety of major destinations and origin clusters: Midtown, Chinatown, Fort Lee, Newark, White Plains, and so on. The problem with this is that whatever you do, the buses slow down dramatically once they need to use city streets. The more distributed the destinations are, the worse this problem is. Want to travel from the south to Flushing? Enjoy your hour-long slog through Manhattan and western Queens traffic. Really, any destination in Brooklyn, Queens, and Long Island is a nightmare. From Boston, Jersey is also a nightmare.

Don't undersell trains' advantage of being able to make a city stop and continue, without losing too much time or capacity.

Cap'n: Isn't that assuming that demand is already being met by current supply? It's entirely believable to me that Amtrak is charging less than market rates for their Acela service, given that they do so pretty much everywhere else. Acela just happens to be popular enough that it actually earns enough to meet its operating expenses.

That said, even if fares go down this should encourage more ridership away from cars and planes as it becomes more affordable and (hopefully) more convenient thanks to increased seat availability. Or, stated another way, less trains unavailable because they're already full. And I think it's fair to assume that even with increased capacity and ridership the total profits earned by Acela would increase if they added more train cars.


Ive been following the intercity buses since they began to emerge as a popular thing in 2006. the ridership gains have been outstanding.

I rode Megabus just this week and wasnt even able to get on the real bus....it was sold out, so they had a coach usa bus leave at the same time to fit in another 40 passengers.


One huge way to increase demand is to speed the buses up...they spent an hour crawling through Manhattan

Alon, I don't think it's accurate to say that from Boston to Jersey is a nightmare, since during rush hours Peter Pan goes through Fort Lee to get to Hartford from the Port Authority.

Alon: Look at markets like Mexico and Brazil which have extensive bus networks.

And ridership is about to skyrocket
http://www.telegraph.co.uk/travel/travelnews/9208649/Megabus-launches-1-service-to-Europe.html

And of course, the US doesn't have much of an intercity rail network, either. It's formally legal to run trains, but not in any cost-effective manner.

The reason I bring up South Korea is that it has both an extensive express bus network and an extensive intercity rail network. Add up this and the pitiful mode share of Northeastern express buses and what you get is that Megabus is like American commuter rail - nobody likes riding it, and when alternatives exist, people take the alternatives.

I’m late to this, but it’s worth noting that MegaBus tried competing in the Chicago-Milwaukee market and was all but crowded out by the Hiawatha (a friend intended to take Megabus from Cleveland to Milwaukee with a transfer in Chicago, but MegaBus frequency was so poor he ended up taking Hiawatha instead for the Chicago-Milwaukee leg instead).

(This is Beta Magellan, my wordpress account’s giving me trouble for some reason.)

"Which is likely to get more people out of their cars, improving signaling and increasing train length, or increasing the number of buses?"

The buses are basically stuck at the Hudson River; there are only two tunnels and one bridge, and even if you kicked all the cars out of the Hudson River crossings, it wouldn't help much -- they're massively congested just with buses. I did this trip last week.

PATH is at capacity in its four tubes. Amtrak/NJT are at capacity in their two tubes. The ferries are too slow and really can only serve people living near the New Jersey waterfront.

After that, the next priority is efficient use of Penn Station. Through-running would get a *hell* of a lot more trains through there.

One substitute for more Hudson tunnels would be more NJ train service to Hoboken and much, much more ferry service to Manhattan, but you'd have to beef up west-side subway service too, so....