How not to deal with parking moochers

Let's say that you live by yourself in a two-bedroom apartment. Your friend's brother is coming to town to look for a job, and your friend asks if he can stay with you. Do you (a) say "Fine, and I'll even let you stay rent-free for two months, but then you'll have to start chipping in?" Or do you (b) pay all the rent yourself for two years and then say, "Man, I know you're not making that much, and I love having you around, but the rent just went up and I need some money for these root canals I had"? If you answered (b), congratulations! You're Mayor Vincent Impellitteri. 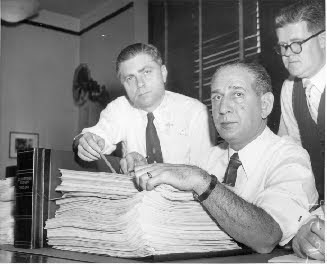 Mayor Impellitteri wishes he didn't have to ask you for this, man, but Abe Beame is bugging him about it. Photo: La Guardia and Wagner Archives.
In previous posts I've talked about how it was illegal to park your car overnight in New York City in the 1940s, how car ownership got out of the NYPD's control, how the car owners developed a sense of entitlement, and how the media and politicians sympathized more with car owners than with anyone else.

When 1952 began, it was still illegal to park overnight in New York City, but I get the impression that the ban wasn't enforced very much. Then Mayor Impellitteri made a dramatic speech to the Chamber of Commerce. He began by saying how proud he was of the city, especially when Winston Churchill "marveled that we could ride along the Belt Parkway without encountering a traffic light for miles," but then turned around and said, "it's lucky we weren't traveling through our business and garment industry districts at that hour." Way to sell your city, Mayor!

Impellitteri went on to propose not just a $5 per month fee ($43.47 in today's dollars) for overnight parking, but a $5 per month "automobile use tax" and a city gas tax of two cents per gallon. (A cigarette tax too.) That's terrific, and it's essentially what Mayor Bloomberg, Lieutenant Governor Ravitch and many others have campaigned for in the past five years. And it was necessary because it costs a lot of money to maintain the roads and bridges that the cars drive on all day and park on all night. Someone has to pay for it, and it was bankrupting the general fund. Did Mayor Impellitteri say that? No, like our wimpy housemate he appealed to the drivers' sense of civic duty.

Yeah. I think you can figure out how that went. But I'll have more details.
Posted by Cap'n Transit at 11:43 PM