Earlier this year it was big news when the City released a map, and summary reports of complaint calls to its 311 telephone system. Deputy Mayor Goldsmith claimed that it would "help residents hold government accountable," but it's really hard to take any concrete information from it besides the simple fact that these are the places and issues that people have called 311 about. 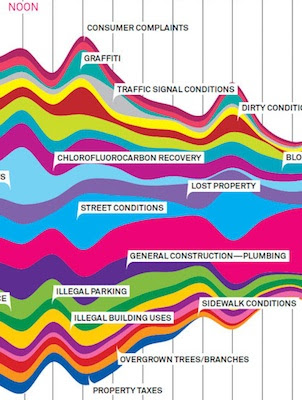 Graph: Wired.
I'm a big fan of trouble ticket systems, especially those that empower a competent, conscientious manager to keep better track of requests and responses. 311 is a great tool for that. Interpreted with caution, the statistics can even tell us some useful things about the city. But as a reliable gauge for what the population as a whole want or care about, or even a replacement for other forms of citizen participation, it sucks. Here are some reasons why.


Who has that kind of time? The young and the old. Children and teenagers may have time, but they can't vote and probably don't think of 311 as something available to them. Unemployed people have time, unless they're following the advice of job coaches to make their job search into a full-time job, but they may feel discouraged and disenfranchised, especially if they come from low-income backgrounds. That leaves retirees and people on long-term disability.

These retirees are the same people who show up at all the community board meetings. Many of them are nice people who care about their neighbors, but most of the current batch are trapped in the middle-class Baby Boomer ideology. This is the worldview that equates car ownership, parking and use with freedom, opportunity and upward social mobility, and sidewalks, apartments and transit with dirt, crime and corruption. This worldview colors and pervades their activities, making them more likely to care about noise, parking and congestion, and less likely to care about sidewalk obstruction, transit delays and pedestrian harassment.

Knowing this, it is not surprising that the 311 calls reflect the priorities of middle-class Baby Boomers more than any actual reality on the ground. That will always be present as long as a 311 call takes so long and other populations feel discouraged and disenfranchised. Cutting the alternate-side announcements to ten seconds or less would make a difference, but the totals are not representative of public opinion in general. We need to be very careful that they're not taken out of context.
Posted by Cap'n Transit at 8:24 PM