Benjamen Walker has a new radio documentary out for the BBC (MP3), all about waiting on line. It's definitely worth a listen. I especially appreciated the distinction between "serpentine" first-come first-served queues of the kind you get at banks and airports, and separate queues of the kind you get at most supermarkets. It always drove me nuts when Duane Reade drugstores had the separate queues, because I kept getting stuck with a tube of toothpaste behind someone with a cart full of stuff, watching people fly through the next register. I'm really glad they've gone serpentine.

I have to say that while I share Walker's concerns about inequality, I have a problem with the overall thrust of his thesis. I'm aware that people generally don't like being called "myopic," but I can't think of a better word. Let me know if you have suggestions. 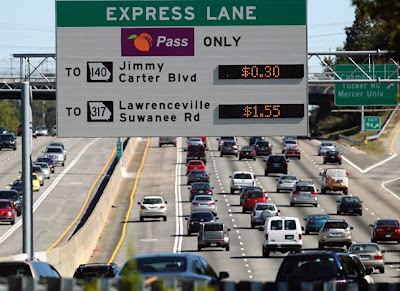 Photo: Jason Getz / Atlanta Journal-Constitution
My problem with Walker's approach to "priority queueing" is the same as my frustration with Richard Brodsky's arguments against congestion pricing, or the Free Public Transit campaigns, or the typical liberal opposition to raising the price of just about anything. It's based on a limited view of its subject, in this case queuing, and focuses in on a local pattern of inequality while ignoring the wider inequalities that exist.

In all of Walker's examples, he presents an existing system without inequalities, and describes a "priority queuing" that allows people to get what they want faster by paying more. But in all those cases, if you zoom out you find that there was always inequality; it has just been realigned on a finer scale, or perhaps in a more blatant way.

Before I get into the exact examples, there's a clear inaccuracy in Walker's story, one that shouldn't have gotten past the fact-checkers. In a segment on the I-85 Express lanes in Atlanta, one of his sources claims that "they kicked the carpools out of the hot lanes, slowing down all the other lanes." Walker himself repeated this in an interview with Mike Pesca on the Brian Lehrer Show. It's not true, and it should be corrected.

These "hot lanes" in Atlanta have been inserted into a system where the very rich have had helicopters for decades and chauffeurs for centuries, and the very poor have no cars. Airplanes have boarded first class passengers before coach for as long as I can remember. Was it ever any different? Maybe back when the middle class couldn't afford air travel at all. Atlanta, remember, is the place that gave Raquel Nelson a higher penalty than the driver of the car that hit her son.

Amusement parks? There are multiple amusement parks in a given area, and they probably already practice some kind of price discrimination. I'm sure that wealthy people who don't want to wait on line at Six Flags can pay for other options, like jet skis. And community colleges - people with more money can get an education at a private college without waiting. Before you could buy Gold Tech Support, the support was always better for IBM customers than for Emachines customers, and people who assembled their computers from parts got no support at all.

That's only scratching the surface. People with money have long been able to jump the queue in nightclubs and restaurants, and shop in stores with shorter lines. Just compare the lines in Brooks Brothers or Ann Taylor to those at Marshall's, Conway or Ross's. If you're prepared to bribe someone you can get all kinds of special treatment; in 2003, Esquire ran two great articles by Tom Chiarella on what you can get for a twenty dollar bill. Usually you don't even have to do anything as crass as bribery, you just have to look like you're going to spend some money.

In the end, I am just as disturbed as Walker at the idea that something can be so much easier for people who have more money. But I recognize that it's always been that way. These new high-tech "priority queues" are just a rearrangement of that inequality, not creating something new. There may be problems with that rearrangement, but you'd have to dig deeper to find them.
Posted by Cap'n Transit at 9:51 PM

I think its fair to say Atlanta kicked out HOV people from their lanes. Not only did they increase the requirements from +2 to +3, but you actually have to go online and report your trip 15 minutes in advance to use it for free!

By piling on these requirements, they can say " sure we allow HOV user!" when in reality theyve done everything they can to eliminate those users.

You have to report your trip 15 minutes in advance? Okay, yeah, that's kicking out HOV users in all but name.

Talking about lines and not transportation:

1. In one of the examples of first-come-first-served lines, airports, you already can pay to jump ahead: there's priority for first and business class at every line, and at some lines there's also priority for frequent fliers. Even in banks there's something like paying for priority, if you have private banking.

2. Lines, like everything else, can be made more inconvenient or less inconvenient. Bureaucracies have learned to adopt take-a-number, which lets you sit while you're waiting and maybe go to the bathroom without losing your place.

In similar vein to take-a-number, I can think of a variety of ways transportation can make lining up easier. At bus and train stations, this means more access and egress points, so that people can get to the platform more easily, without gratuitous lines like those required by Amtrak. It also means more access points on the vehicles, e.g. all-door boarding on buses. To the extent ticket agents should still exist at train stations, there should also be take-a-number at major stations with long lines, but I doubt it's applicable anywhere in the US except Penn Station; on top of that there should be more TVMs, and they should be omni-agency.

On roads, there's already ramp metering, but because the lines happen because at the current price of driving there's more demand than supply, it's possible to just eliminate the lines with congestion pricing. Likewise with lines for parking spots. The spokespeople for the poor, like Matt Taibbi, hate these - Taibbi likes being able to drive from his Westchester home to the Village and park for free. But the poor themselves use Lexus lanes at the same rate as non-poor people - being poor means not just having less money to spend on tolls, but also having less flexibility to avoid driving at rush hour.

On the matter of HOT lanes and equality:

I can't speak to whether they really kicked HOVs out of the lanes by the defacto approach described in a previous comment -- I checked the PeachPass website and didn't find this information.

But studies of other corridors have found that political support for HOT lanes is consistent across income groups, and low-income individuals do use them.

Additionally, they represent a more efficient use of roadway capacity than a simple HOV lane if the HOV lane is operating well below capacity. If the HOT lane is filled to its design capacity (which still requires that a certain speed be maintained), that's fewer vehicles in the general purpose lanes, which benefits all roadway users. And ultimately, HOV users are still the higher priority cohort as they get to use the lanes for free, no matter how high the toll for non-HOV goes. The higher the number of HOVs, the higher the toll for non-HOVs will be. In theory if enough HOVs are attracted to use the lanes for free, there would be no capacity left for toll paying users.