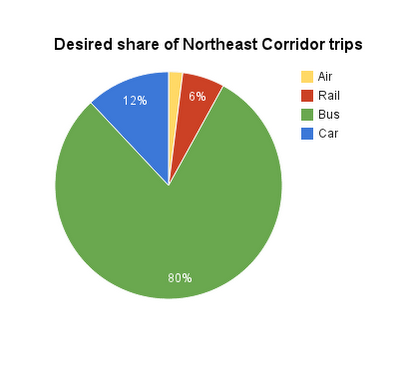 In the comments on last week's post about Amtrak and the Chinatown buses, Ryan Miller points out that I neglected to mention that Amtrak is sold out for the peak hours at least. This point is also made by his cousin Stephen Miller, the new Streetsblog reporter, in a post on September 5.

The North River Tunnels that carry the Northeast Corridor from New Jersey into Penn Station are at capacity. There are only three ways that Amtrak can add more trains, two being a new tunnel under the Hudson or rebuilding the Maybrook line, and both of those are far off. Increasing the speed of the trains may allow a few more runs to fit in, but that won't allow Amtrak to double its ridership. That means that in the next ten years, trains will continue to carry the same number of people, and any increase in Northeast Corridor transit ridership is going to come from buses.

The expansion of bus service will most likely take place at the lower-cost end of the market. Jarrett Walker likes to talk about how buses are theoretically no less comfortable than trains, but it's much harder for a bus to achieve a train-comparable level of comfort on a long-distance run. Even on the smoothest highway (i.e. not the New Jersey Turnpike), the curves are sharper and lane changes are relatively frequent. There is no cafe car.

The best strategy, therefore, is for Amtrak to consistently aim to capture the high end of the market, increasing the speed, wifi and amenities on the Acela Express to a level that will satisfy the air shuttle riders, and those on the on the Regional to just below that level. That means that Bolt and Megabus need to get to one step below that, and Peter Pan and Greyhound need to build reputations of safety, comfort and reliability that are solidly middle class, to compete with driving.

Most importantly, capacity at all levels of bus service needs to increase. And here we run into another problem noted by Stephen: the Port Authority Bus Terminal in Midtown is also at capacity. There is no room for most of the commuter buses to park during the day, so they have to go back through the tunnel to a garage in New Jersey and come back in the afternoon. 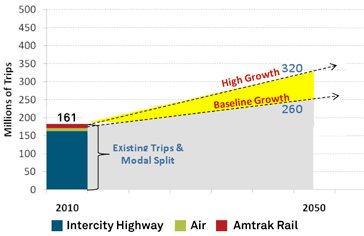 Here's another chart from that Amtrak report (PDF, page 4), showing that in 2010 people took 161 million trips on the Northeast Corridor. If you figure that most of them traveled between 8AM and midnight, that works out to 27,568 trips per hour. If Randal O'Toole is right and 8% of that is on buses, and we guess that the buses carry an average of 30 passengers, that's 74 buses an hour, which sounds about right.

If we assume that the total number of trips will remain constant, that means that we need to plan for a tenfold increase in the number of buses cruising into New York, i.e. 662 more buses per hour. Linear projections are stupid, but let's just imagine that the "Baseline Growth" scenario of 260 million trips per year projected by Amtrak in the chart above comes to pass. If that's all absorbed by buses, it means 1227 more buses per hour; if it's the "High Growth" scenario then we're looking at 1569 buses per hour.

Are we ready for that? I didn't think so.

Could we be ready? Sure! That's the kind of thinking we transit advocates have to do. What does mode shift really look like?
Posted by Cap'n Transit at 11:19 PM

Amtrak has several ways of adding capacity, without new concrete:

1. Better signaling in the North River Tunnels, to allow 30 tph up from 24 tph today.

3. Using more space within the trains for passenger seating. The Acela has fewer seats than a single-level TGV, and half as many seats as a TGV Duplex or single-level EMU HSR. It's not out of more spacious seating, but out of inefficient use of space.

Faster speed is actually going to reduce capacity, because braking distances get longer. Worse, because the loading gauge in the North River Tunnels is restricted, ordinary unsealed trains can't go very fast. Today's speed is 60 mph, and I don't think it's possible to increase this beyond, say, 130 km/h. Sealed HSR can go much faster, but if not all trains go the same speed through the tunnel, capacity is reduced. I think in my own travel time calculations I split the difference between speed and capacity and assumed 160 km/h.

By the way, a realistic mode shift based on existing mode splits in France, Japan, and South Korea is about 30% rail on NY-Philly and 60% on NY-DC, Boston-Philly, and Boston-DC. My sanity-check ridership is pretty close to what you'd get. It can be satisfied by running an average of about 5 high-capacity tph south of New York, which probably means a base of 4 tph and a peak of 6 or 8. This is intercity-only - if fares are comparable to commuter rail, it will probably require running a few more peak-hour locals to satisfy demand from the Trenton area and probably also induced commuting from Philly.

Also the trains I'm thinking of are lower-capacity than Shinkansen because they're 2+2, they're still pretty high-capacity, and the Northeast Corridor is not the Tokaido Shinkansen. The NEC is more comparable to the KTX in terms of travel demand, and the KTX uses lower-capacity trains and runs 6 tph at the peak.

Rail is nifty this way - once you build a link, even if the traffic that justifies it is just a few tph, you can scale up and provide Thanksgiving capacity assuming you have the rolling stock for it.

Thanks, Alon! I was hoping you'd jump in with some elektronik.

Let's throw out the sanity checks for a minute and go crazy. If you implemented those four changes (without sacrificing spaciousness, because I think it helps justify the high fares), how many seats per hour are we talking about overall? A thousand? Ten thousand?

So at 4 tph, i.e. current traffic, it's 4,000 seats per hour. It's more than double the current number of seats. At 6 tph, make it 6,000. Honestly if there's more, there are enough profits to pay for a new tunnel, and then the capacity constraint is the number of trains per hour on dedicated HSR track, which is about 14 or 15.

Thanks! But it does sound like you have to sacrifice comfort to fit those extra seats in. Still, with all 10-car trains and better signalling, you could get enough capacity to finance a new tunnel. Then they might have to build an extra set of tracks from Sunnyside to the Hell Gate.

It's then a question of what to do in the meantime, or what to do if we can't get the 10-car trains and better signaling.

Alon hits most of the points I would, but I would also add a point about the utilization of commuter rail. While the buses have taken out a lot of the ridership market, the SEPTA/NJT connection still carries quite a few people between Philadelphia and New York, the biggest intercity market on the NEC, and there's been a mini-renaissance since the biggest Chinatown carriers got raided by the feds.

While it's not SEPTA's or NJT's place to compete on price with the buses (they occupy an intermediate market demographic between the buses and Amtrak), the fact that they still hold market share, while being ~2x the average fare and 0:40 longer than the scheduled trip length, speaks to the attractiveness of the rail option. There may be no cafe car (and on SEPTA, no bathroom), but the comfort and schedule reliability are still attractive to the market segment that has been priced off of Amtrak. In addition to the connecting passengers, there is a large portion of SEPTA-land that goes to NYC by driving to Hamilton and parking, and reasonably always will because connecting in Philadelphia is backtracking too far and driving the whole way is too expensive.

NJT may cry that they're at capacity at rush hours, but 1) that's clearly not the case outside of rush hours, and 2) they can take the same steps Amtrak can to increase capacity at the peak, since they share the signalling system, can run longer trains (don't tell me they run 12 cars from Montclair), and continue with their aggressive changeover to MLVs from single-level Comets.

SEPTA running a one stop express 30th St-Cornwells-Trenton cuts the schedule to 0:31 with 110 mph Silverliner Vs. That's half the time penalty right there. More time can be found by tightening up the transfer times at Trenton. Eliminating the transfer altogether with NJT-equipped Clockers running from 30th St. Lower Level or Suburban is the optimal state, but that political problem is left as an exercise for the reader.

The platforms at the major stations on the NEC are 16 cars long. Voila, buy more cars and you can double the capacity of the the system with the same schedule. People who get on or off at Union Station will be .... annoyed. It's a long walk from the 16th car to the headhouse.

I should have saved the link. Something like 2/3rds of the people boarding trains in Trenton and Hamilton are Pennsylvanians and 80 percent of them are going to Manhattan. Worked out to just over half the passengers. So Clocker like service would attract the people along the NEC. It wouldn't attract people along the former Reading lines. A service like the Wall Street might

Amtrak's gold-plated Master Plan for WAS includes extensive platform access from H St, much in the vein of Grand Central North. It's actually one of the better elements of the plan. Now if they could only stop being quite so idiotic about their boarding procedures...

A Wall Street/Crusader is a nice dream, but you can probably do just as well with an upgraded fast, frequent bus connection between West Trenton and Trenton. The NEC is faster, and has intermediate destinations that the ex-RDG ex-CNJ lacks.

Adirondacker, are those people boarding at Trenton and Hamilton from the immediate Philadelphia area, or do they instead live just across the river from Trenton?