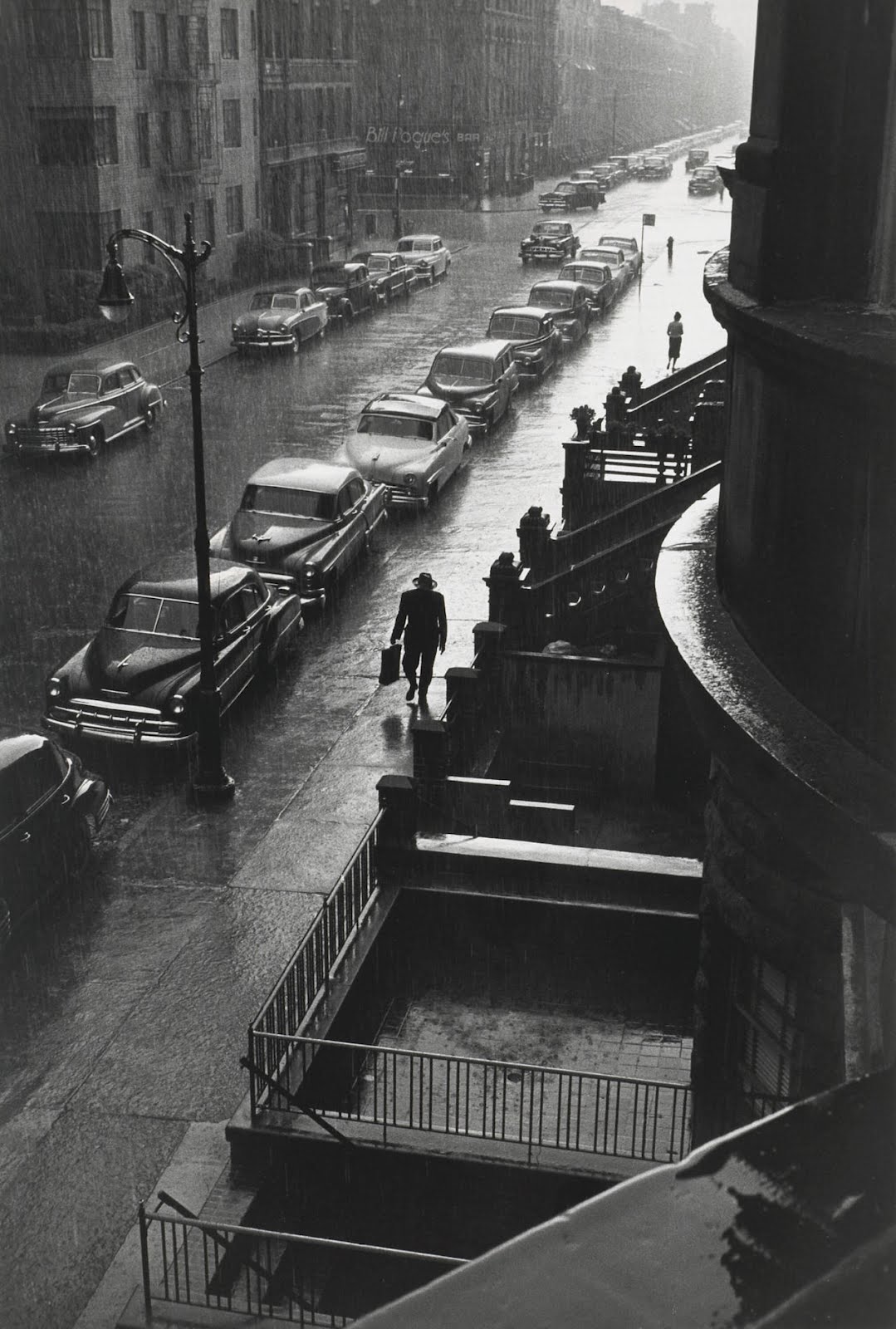 In previous posts I've talked about how it was illegal to park your car overnight in New York City in the 1940s, how car ownership got out of the NYPD's control, how the car owners developed a sense of entitlement, and how the media and politicians sympathized more with car owners than with anyone else. 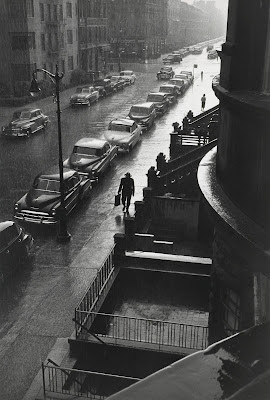 Man in rain, 1952. Photo: Ruth Orkin.
On Tuesday I described how in 1952 Mayor Vincent Impellitteri proposed an overnight parking tax of $5 per month, an "automobile use tax" of $5 per month and a city gas tax of 2¢ per gallon. This was in response to a budget crisis - you thought there were no budget crises before the 1970s? - that may well have been brought on by the city building so many new roads without any new money to pay for them.

As I wrote on Tuesday, it's generally a bad idea to let someone use your stuff for free if you plan on charging them for it in the future. If you set expectations well - in other words, make it clear that you're doing them a favor and tell them exactly when you want them to start paying - it may work out just fine. The worst thing you can do is just kind of let them grab your stuff and then appeal to their sense of charity. That implies that they have a right to your stuff, and you'd let them have it for free indefinitely if you had enough money.

The worst thing is exactly what Mayor Impellitteri did, and it turned out as bad as you'd expect. From what I can tell, the State Legislature did not give the city the right to levy an "automobile use tax"; otherwise Bloomberg would have just done it. They also did not allow the city to charge a per-gallon gas tax, although the city does charge a 4.375% sales tax on gasoline. However, they had already given the city the right to charge for overnight parking in 1947.

On February 22, the City Council passed a home rule measure assenting to the change. And then the backlash began in earnest. On March 12, Acting Traffic Commissioner T.T. Wiley went to the Times to complain about how much of an administrative "headache" the $60 overnight parking fee would create, and on March 18, the president of the Automobile Club threatened "serious trouble" if the city went ahead with the fee. On April 4, a group of seven City Council members announced their opposition to the automobile use tax and the overnight parking fee. On April 14 it was the turn of the City Comptroller, Lazarus Joseph.

Critically, the Council and Joseph ignored the entire possibility that drivers might have some obligation to pay even a part of the upkeep of the roads that they used. The Pigovian, and now Shoupian, idea that free parking can cause people to drive more, making the city a worse place, was not even considered. The entire focus was on finding "alternative sources of revenue" - anything besides car use to tax, or even short-term gimmicks.

In the end, the Board of Estimate vetoed the overnight parking fee. For those who don't know, the Board of Estimate was a crazy, undemocratic institution that ruled the city for ninety years. It was an executive council consisting of the Presidents of each of the five boroughs with one vote each, plus the Mayor, the Comptroller and the City Council President who had two votes each.

The Board of Estimate was deposed in 1989 when the United States Supreme Court ruled that its power violated the Fourteenth Amendment guarantee of equal protection, because Brooklyn's 2.3 million inhabitants had the same vote as Staten Island's 378,977. Imagine if the city today were controlled by a group consisting of a few mostly reasonable people like Mike Bloomberg, Scott Stringer and Ruben Diaz Jr. paired with faux-populist panderers like Christine Quinn, John Liu, Marty Markowitz, James Molinaro and Helen Marshall.

Back in 1952 the Board still had all its power, and on April 21, in the words of Times reporter Charles G. Bennett, it "informally decided to leave it to Controller Lazarus Joseph and his aides to turn up sufficient alternative sources of city revenue to justify dropping further consideration of what promised to be the most controversial and most sharply attacked item of Mayor Impellitteri's tax program." And that was it. The drivers had been squatting on city streets for free for five years, and they have continued for another sixty.

Another interesting angle to the story was that in all the New York Times articles I could find about the issue, the only people in favor of the overnight parking fee were members of the Impellitteri administration, and their arguments were couched entirely in terms of fiscal need. No citizens groups were quoted on the pro side of the issue to balance out the Automobile Club and their members. It is not clear if there was anyone.

It's a striking contrast with the city's installation of bicycle facilities, where every new project is challenged with a statement along the lines of "Cyclists need to start obeying the law and respecting pedestrians before they get any more lanes." If motorists had been held to that standard in 1952, they'd all still be parking in garages.
Posted by Cap'n Transit at 11:48 PM

Wow. It is amazing how many of our problems arose from extremely undemocratic forms of government. We're still fighting with the legacy of the formerly-unrepresentative State Senates nationwide; even though Baker v. Carr required them to be more representative, gerrymandering has been used to maintain the stranglehold on power by the entrenched interests in many places, including NY.

But what's more amazing is that one of these undemocratic operations -- the NYC Board of Estimate -- wasn't abolished until *1989*. Seriously, I was already a teenager! I had no idea such things were still around!

We may actually be able to get improvements in this country if we keep pushing for actual democracy.