PIty for the rich and fake populism in 1940s New York

You may not have heard this particular story before, but it'll sound awfully familiar. That's because the story of the Great Curbside Land Grab of 1952 is just another instance of the Fake Populist Resource Grab. The stories are timeless; in fact they're being repeated again today with the MTA payroll tax. And just like today, it's not clear how much of it was a deliberate, planned strategy to defraud the public and the poor, and how much was clueless, entitled selfishness dressed up as victimization and self-pity.

What is clear is that in 1912 curbside space was a resource that was available to anyone, if underused, and in 2012 it is restricted to people who own a car and want to park it. But the responsibility for maintaining and cleaning this space is a public obligation, paid for by everyone, whether they drive or not, through sales and income taxes. 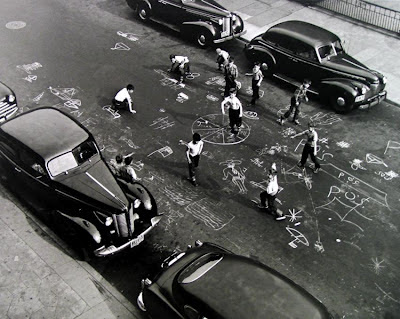 Prospect Place, Brooklyn. Photo: Arthur Leipzig, "Chalk Games, 1950."
As I wrote last week, the New York Times archives tell us that between 1912 and 1947 New York City had seen a huge increase in car ownership, but it was still illegal to park a car at the curb overnight. Due to a previous Empty Promise, most of these new car owners had not budgeted for garage space, so some of them parked on the street illegally. Others paid for garage parking, but not enough to generate profits for the garage owners, so the garage owners boosted their revenue by parking people's cars on the street instead of in their garages.

Even in 1949 people are getting ready for a Fake Populist Resource Grab. In the Fake Populist Resource Grab, you start with a group of people who are stuck. They went out and bought a car or a house on Staten Island, or started a business, or bought a taxi license. They never expected to have to give up double-parking, or pay for the bridge or the trains, or compete in an open market. But now someone is telling them they have to.

Then somehow (and I'm never quite sure how they do it) they get pity. No matter how rich they are, or how unfair their position already is compared to those who don't have that car, that suburban house, that restaurant, that taxi medallion, their plight somehow provokes a gigantic outpouring of sympathy from the media and politicians. Even people who have viciously punitive attitudes towards the homeless and hungry somehow manage to feel all tender and solicitous.

In the case of overnight parking, people felt bad for the drivers who had no garages to park in. Bob Moses, in his letter to Mayor Impellitteri, said that the "solution of the parking problem" is to build new garages for all the people who didn't budget for garage space. He wanted to use revenues from existing parking facilities to build new garages, but not for transit. Of course, he wanted street and parkway maintenance to be paid out of the general fund.

As I said before, with the number of cars there were in 1947, it made sense to park some of them on the street overnight. Nobody else was doing anything with that space in the middle of the night. But it also made sense to charge people something for the privilege of using that space. The city thought so, and in 1952 the State Legislature passed a law allowing overnight curbside parking and authorizing the city to charge up to $60 for an annual parking permit.

As we all know, the overnight parking certainly happened. The sixty dollar fee, not so much. Tune in soon for the details...
Posted by Cap'n Transit at 11:51 PM