Trainwreck at the edge of the water

Today I took a little trip up to the Mitsuwa Marketplace in Edgewater, New Jersey, and picked up some Pocky, instant iced green tea, and river views. This large Japanese supermarket, with in-house cafes and nearby bookstore and chatchka shop is definitely worth a visit; I've been going every few years since 1996, when it was called Yaohan. The Kennedy Boulevard jitney providers have taken over the shuttle service, which now costs three dollars each way and leaves from Gate 51 of the Port Authority Bus Terminal every half hour on weekends. But do yourself a favor and wait upstairs, because the jitney drivers don't shut off their engines when they're in the terminal.

It made me sad to look out the window as the van went down River Road, though, sad for what is and what might have been. Of all the missed opportunities for urbanism, this is one of the most extreme that I know.

I'm not sure what was at the foot of the Palisades when the Dutch arrived in the area; probably just some scree like in the Palisades Interstate Park further upriver. Ferry docks were built at strategic points, and the railroads dug tunnels through the ridge to the docks. In this stretch of the river, the West Shore Railroad had a tunnel through to Weehawken, now used by the Hudson-Bergen Light Rail, and the New York, Susquehanna and Western had a tunnel to Edgewater, now abandoned. Tracks were built connecting the mouths of the two tunnels to the terminals of other railroads further south, and a series of piers were built along that railroad to ship various materials.

As the railroads cut back in the 1950s and 1960s, the shipping business migrated to other parts of the port area like Newark, or other parts of the world. Many of the piers were abandoned for years. Since the 1990s the area has experienced a huge construction boom. I'm sure there were several factors involved, probably including a significant rezoning, but it was also in part due to Arthur Imperatore's successful revitalization of the commuter ferry service, and the arrival of the light rail line.

Much of the ride down River Road in 1996 looked similar to what you might have seen in 1966, but it's unrecognizable today. Almost every pier, every plot of waterfront land, hosts either a shopping center or luxury housing. Many of the old buildings further inland have middlebrow stores and restaurants on their ground floors, and are being infilled with other shops and gas stations.

So this is infill development, really close to Manhattan, instead of way the hell out in Suffolk County or the Highlands. Why does it make me sad? Because it might as well be in Suffolk County. There are almost no walkable streets in the area. River Road has hardly any pedestrians and you can't blame people because it has wide car lanes, too many of them, and narrow sidewalks, and virtually none of the shops, restaurants or residences engage with that sidewalk. There is a semi-continuous riverwalk, but it zigzags around the piers and buildings, past windows and terraces that do not interact with it. Despite all this development, River Road does not make the frequent network map because you're very likely to wait more than fifteen minutes for a bus.

River Road is one of the reasons I'm so skeptical about "density" being an important factor in transit use or walkable streets. It's got density, or something resembling density. I don't know the numbers, but all of this new construction is apartments and townhouses, with no detached single family houses that I could see. But all that development was designed for driving. 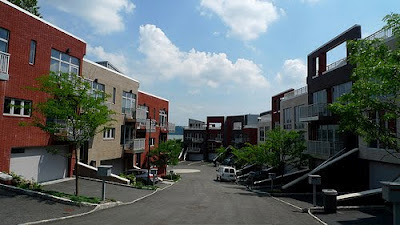 Vela Townhomes. Photo: Hobokencondos / Flickr (be sure to check out the photostream for more waterfront goodness)
Every housing complex has tons of parking, often obscured by an overhanging apartment or townhouse ... structure (it's hard to call them buildings because the architecture is so fragmented). Sometimes the parking is in its own big ugly building, and sometimes it's designed so that it's immediately adjacent to the apartment or townhouse of its occupant. The new shops and restaurants are all the same kind of strip development, overloaded with surface parking that would be equally at home in Scottsdale, Arizona as on Tonnelle Avenue on the other side of the Palisades.

So here we have dense infill development a short distance from one of the most walkable job centers in the country, and still it's just as car-oriented as Phoenix. I'm guessing that the two biggest factors involved are the zoning code and outdated standards followed by the New Jersey Department of Transportation, which together have built one of the densest driving-oriented suburbs I've seen.

I call this a "trainwreck," because I've been watching it for years, powerless to stop it. Of course I didn't have this blog back in 1996, and I was only just beginning to grasp connections between transportation and land use. I had no way to talk coherently about this, and nobody who would listen to me if I had. So I've had to just sit and watch for sixteen years, as one unwalkable waste of space went up after another.
Posted by Cap'n Transit at 11:51 PM

I have a friend that lives in the apartments just adjacent to the Port Imperial Ferry. My initial reaction to the area was "Oh, it's close to the ferry, the light rail, and several bus lines, and it incorporates retail and restaurants into the complex." But then my friend told me that he just drives to the supermarket that is a mere 1000 feet from his building so he doesn't have to carry his groceries. Ugh! (He also insists on having a big SUV because it's "much safer".) Then I learned that they opted against building a stretch of ground level retail next to his building because they instead need the space for pit facilities for the Formula One car races. Ugh, again!

I had the same reaction last time we made a trip to Mitsuwa. Totally designed for car travel, and just crossing River Road to the auxiliary parking lot felt unsafe. A weird, decidedly non-urban urban place, and an enormous wasted opportunity.

As a planner, I am feel sad when I see the Edgewater has chosen for themselves.
However, River Road is a road maintained by Bergen County Public Works- as institution that does not believe in anything other than personal cars, period. The road has 4 travel lanes and a turning lane from Hudson County until NJ Route 5 (Gorges Road). The speed limit is 35 MPH for the entire length in Bergen County, from the GWB Southward.

Bergen County Planning mentions in the study that they approached Edgewater in the early 1990's and suggested to extend the light rail north and use the abandoned NYS&W tunnel to Fairview instead. Edgewater did not want any part of the light-rail and did exactly the opposite of what Bergen County, NJDOT and NJ Transit had suggested--it did not require developers to preserve the ROW or reserve a ROW for the Light-rail, should it be built in the future. Development started and the potential ROW through Edgewater was lost. Today, the Light rail could only be extended using surface streets.

Fast forward to a 25 year-old couple living along River Road.....they take the NJ Transit bus to work in the city each day or catch the NY Waterway Shuttle bus. They walk outside their development and step onto a 3-foot wide sidewalk straddling the edge of a 4 lane street with fast moving traffic only inches away. Across the street from their apartment is a grocery store- they try to cross directly in front of their apartment, since the nearest crosswalk is over 1000 feet away and does not even have a sidewalk for the entire walk. They run across the street and land in a huge parking lot that they must walk through to get to the entrance.

What is being done to fix this situation?

Bergen County Planning and the NJTPA have funded a "Phase Two" study to improve conditions exclusively for pedestrians and bicyclists.

The Project website and related documents from Phase one are at:

The future plans for the corridor involve a continuous sidewalk from the GWB to Hudson County, completion of the Hudson River Walkway as well as pedestrian connections to all the stores it passes (Mitsuwa, Edgewater Town Center, City Place, ect.), bike lanes from the GWB to Hudson County, a multiuse path extension from the GWB southwards and lastly, Traffic Calming on River Road and stop its use as a pass-through route by changing the street to 2 lanes with a turning median with either floating parking on both sides with a buffered bike lane or just a bike lane with regular parking.

The plans are still evolving, but Edgewater seems to be fed up with the massive numbers of buses and the new residents are voting differently than one that chose no light rail in the early 90's.

I hope I shed light on a few of the issues, great post!

I may share this post with my city's planners who seem to want to have less people in my neighborhood walking in the name of "density" and "walkability".

Thank you all for the great comments, especially West!

Helen, do you have specifics about what the city planners are trying to do?

"Bergen County Planning mentions in the study that they approached Edgewater in the early 1990's and suggested to extend the light rail north and use the abandoned NYS&W tunnel to Fairview instead."

Absolutely the right thing to do... I've wondered many times why the HBLR didn't run that way and use the Edgewater tunnel.

"Edgewater did not want any part of the light-rail and did exactly the opposite of what Bergen County, NJDOT and NJ Transit had suggested--it did not require developers to preserve the ROW or reserve a ROW for the Light-rail, should it be built in the future. "

Asshats. These are the sort of people who prevent us from having nice things.