Can we push for more buses AND trains?

Alon Levy has posted a nice long response to my posts about bus service on the Northeast Corridor. Now, Alon and I are friends and we could probably hash this out over coffee the next time he's in New York. But I think it's helpful to air this discussion on our blogs so that you all can join in, and of course get the benefit of our tremendous knowledge and wisdom. 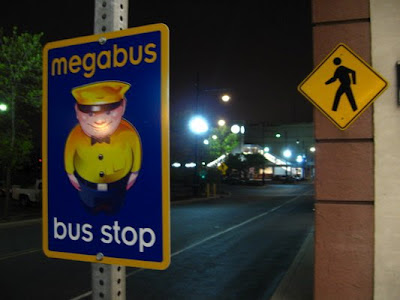 The Megabus stop in Secaucus. Photo: Charles F. / Yelp.
First, some clarifications. I really, really don't want you to start loving the bus. I don't particularly like them myself. Even if they weren't smelly and cramped, they're always going to lurch. I would love it if we had enough passenger train capacity that I could go wherever I wanted to go by train.

I am advocating investment in bus stations at various locations around the metro area, but not government investment. Of course, where there are existing government-owned bus stations, like in White Plains, the intercity buses should be offered space. Similarly, they should be allowed to use municipal lots and garages, like those in Flushing and Williamsburg, for pickups and layovers. And in Chinatown, as in most of Manhattan, land may be so expensive that none of the bus companies can afford to build their own terminals.

That said, it seems likely to me that if we provide a reasonable amount of curbside pickup space in places like Jackson Heights, Elmhurst and Bay Ridge, a bus company will eventually be able to accumulate enough profit and/or credit to build a terminal. That also assumes that there would be the necessary zoning and/or waivers to allow such a terminal to be built in a convenient location.

Alon is probably right, in part at least, that what's motivating me to advocate expanding the bus network is "desperation" and "defeatism" about the likelihood of reforming Amtrak and the Federal Railroad Administration - or about getting another train tunnel dug under the Hudson. Part of my motivation is also that we may have extra advocacy hours beyond what we need to get rail improvements, and we should spend those on expanding the non-car, non-plane mode share. But that's not all.

It's also that the timeframe for bus improvements is shorter. If we get the FRA to relax its regulations, and then get Amtrak to buy more train cars, we still need to get Congress to pay for the new cars, and then it takes a few years for the cars to be built. A new tunnel would take even longer.

We should absolutely do all of those. But what do we do in the meantime with all the people who really want to go to Boston without driving? Let's satisfy that demand over the short term with buses, warehouse it, and then when Amtrak gets their new train cars it will free up a bunch of bus capacity, which will then be available to absorb the next wave of transit demand. This process can be repeated when the new tunnels are completed, and again when the Poughkeepsie Bridge is reactivated.

The question, I guess, is how much time anyone's putting into these goals, besides just writing about it on blogs. If someone spends half an hour writing a letter to Steve Levin asking for his support in putting a bus stop in Williamsburg, is that a half hour they wouldn't have spent writing to Nydia Velasquez asking for FRA reform?
Posted by Cap'n Transit at 1:09 AM

It depends on what your goal is. If you want to improve your transportation options, both are good. On a more fundamental level, if you want legislators to get out of their power broker and NIMBY mindsets, it's good to petition community boards to permit curbside pickups.

But if what you want is to get people out of their cars, then forget about it. Look at the mode share of express buses in Korea or Japan or the US. As I just said in a comment at my place, Korail runs both HSR charging fares comparable to or slightly lower than the cheapest Regional tickets, and slower trains charging fares comparable to or slightly higher than Megabus and Bolt with comparable average speed. By an overwhelming margin (>2-1 on Seoul-Daejeon, >10-1 on Seoul-Daegu and Seoul-Busan), people are taking HSR.