In praise of pedestrian sidepaths

Back in August, Chuck Marohn wrote that the roads in our National Parks could be models for the "country roads" he envisions as alternatives to the "stroads" that state transportation departments are currently building all over the country. In response I wrote that my own National Park experience was a frustrating and disappointing, and that we need to do more to make our parks walkable, including providing transit. But I have a further response: I don't think that these would make good country roads. 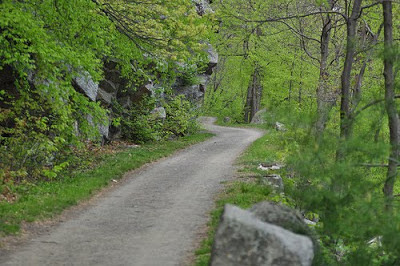 Car-free carriage road, Mohonk Preserve. Photo: knorris908 / Flickr.
Old carriage roads are great to walk on. You can find them in many parks like Rockefeller State Park (accessible by foot from the Tarrytown and Scarborough train stations) and Mohonk Preserve. What makes them so nice is that they don't have any cars. They hardly have any carriages either, but as long as there's enough room to pass that wouldn't be so bad.

Today's country roads are not good for walking. To see why, all you need to do is take a long walk or bike ride on one. You'll be buzzed by cars going much faster than you. Some drivers will be going 55 or even 65 on a straight section. Even if you're doing twenty miles an hour on your bike, it's too big a difference. I don't care how wide the shoulders are, nobody wants to walk next to speeding traffic.

I've been on narrow country roads in England and France, and they're not much better. Maybe the cars appear a little less often and go a little slower, but it's still stressful to think about them. A gravel road might slow the cars down more, but I would it be enough? 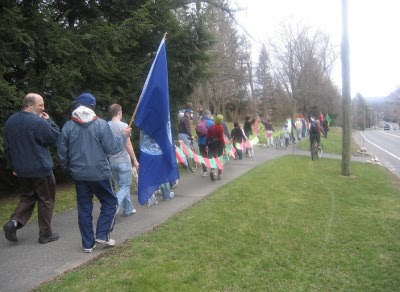 The sidepath on West Street in Amherst hosted this Greening the Roadways parade in 2007. Photo: Step it Up 2007 / Flickr.
For asphalt roads, as long as we have cars we'll need physical separation for cyclists and pedestrians to feel truly comfortable. We even have a model for this: the Pioneer Valley of Massachusetts. All the streets of Amherst, Northampton and nearby towns have sidewalks, and most of the heavily traveled country roads in the area have sidepaths. These are not the shitty stroad sidepaths that you may have encountered in some areas - they don't actually have those on their stroad, Route 9 - but a whole different experience on a two-lane country road. 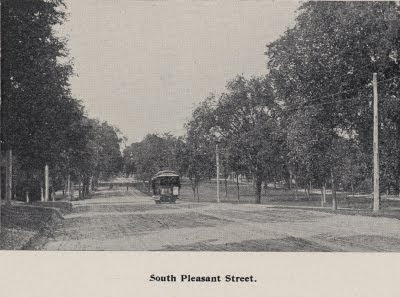 Amherst's sidepaths date back a long time. Photo: Amherst College Archives / Flickr.
I hate to say it, but if we want people to walk or ride bikes on country roads, we'll need more sidepaths. It would be expensive to build sidepaths on every country road, but if you look at all the plans to "four-lane" country roads into stroads, it would be a lot cheaper, and the connectivity it would provide would be a lot more sustainable.

Back in late March and early April, I wrote that roads, streets, railroads and country roads have their own optimal vehicles for carrying freight and people - although railroads are better than car roads. I'm now going to add Really Narrow Streets to the mix, because I think they're different enough from the typical American streets that Nathan Lewis calls "hypertrophic." We can also see that they accommodate pedestrians differently: