The limits of naive Monderman analysis

I've talked before about the revolutionary approach to traffic engineering that was pioneered in the Netherlands by the late Hans Monderman, father of the woonerf. The crux of Monderman's idea is that too many signs and signals slow down traffic and make roads more dangerous. It's an application of the general principle that micromanaging anything can make it worse. 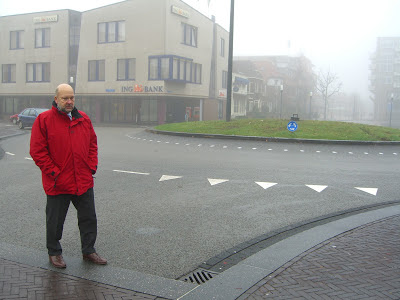 Photo via Jalopnik
In one well-known example, Monderman replaced a confusing multiway intersection in Drachten with "something resembling a public square that mixes cars, pedestrians, and cyclists" and removed all the signs, thereby encouraging motorists to make eye contact with each other and with pedestrians and cyclists. He famously demonstrated the safety of the new design by walking through it backwards.

Like all revolutionary ideas, Monderman's techniques can be overapplied simplistically in situations where they are not valid, leading to bad results. In fact, the very micromanagement that it's a reaction to is a naive overapplication of the perfectly valid idea that sound management can make traffic - or anything - work better.

Having said that, what I don't want anyone to do is give up on Monderman out of fear of getting it wrong. Monderman is one of the most important transportation thinkers of the past fifty years. So how do we carry out the kind of sophisticated analysis that Monderman undertook and not the naive applications I've seen?

The key lies in not applying Monderman's ideas and techniques indiscriminately, and instead knowing what circumstances warrant a Monderman technique like stop light removal. If the circumstances don't warrant removing the stop sign, but you think it would be better off without one, you need to know what circumstances would warrant such a removal and how to get to that.

Stop light removal is an interesting example. It calms traffic by replacing rules (follow the light) with negotiations (communicated through eye contact). So why aren't the numerous "unsignalized" intersections in Queens, Santo Domingo and parking lots worldwide examples of Mondermanian harmony, equality and pedestrian safety?

In Santo Domingo, interestingly, drivers have invented a system that allows them to communicate with each other while excluding pedestrians and cyclists. People complain about the honking in that town, but they don't realize that the honks are signals. A driver approaching an unsignalized intersection will honk. Whoever honks first gets to go first, and everyone else has to yield.

Note also that the Queens stop signs and the Santo Domingo honking both allow the drivers to go faster and not make eye contact. Monderman was very clear that a driver can only be expected to yield to a pedestrian if "the speed is at the same level." These systems increase the relative speed, making yielding less likely.

In the parking lots, the purpose is to get into cars. Although parking lots are used for many other things, their designed purpose is to store cars. People therefore see any other activity, including walking to cars, as secondary, and devalue them.

Those parking lots are not woonerven, because Monderman felt that a street or an intersection should signal to its users through design. In clip four of this video, he points out a marked crosswalk that was requested by a senior citizens' group. He reluctantly agreed, but in the video he acknowledges its value: "You can see the pedestrian crossing is also some social protection, not just traffic, and as a social function I love it." He also describes his use of raised intersections to signal to drivers that "there might be people" - and that people matter.

So if you like Monderman (as I hope you do), go ahead and apply his ideas! But recognize the depth of his thinking and the care that he put into his designs, and learn from him. The videos by Jerry Michalski and the Tom Vanderbilt article that I linked to above are a great place to start.
Posted by Cap'n Transit at 12:20 AM

Interesting post. I see woonerfs are failures precisely because theyre everyone in the US, as you mentioned, as suburban parking lots where cars, bikes and pedestrians all share a low speed space. Theyre amazingly safe (even with kids running around) but theyre not comfortable, the cars act as plows and push everyone to the sides. As you noted, they are auto dominated, but honestly, the same is true in european shared spces. Simply due to size, the pedestrian always yields to the car, because the car cannot get around you, so its rude not to move away.

@James
There are a lot of narrow streets and associated intersections around here that have no sidewalks and are used by pedestrians, bicycles, and cars.

The main power yielded by pedestrians (and bicyclists) is that of simply ignoring cars, meaning the cars really have no choice but to drive about 1mph. Sometimes cars will try to "dominate" by revving their engine, going faster in short busts, etc, but ... people ignore them, walk in front of them anyway, stop for a chat in the middle of the road, etc.

The car drivers are sometimes clearly furious (especially those in expensive cars), but there's really very little they can do except creep along at a pedestrian pace.

I'd say in general this works pretty well, but you need a certain volume of pedestrian/bicycle traffic to pull off.

Thanks for this one.

I've lived in Washington Heights and Inwood for many years and never figured out all the darn honking. I psychologized it ("Pay attention to me, I'm important") but this description of drivers in Santo Domingo makes sense, and many of the honkers are gypsy drivers. Thanks, Cap'n!

Oh, no, PWR, that honking is because the gypsy cabs aren't allowed to have available lights.

James, parking lots are NOT woonerven, although they are shared spaces.

True woonerven usually require (among other things) an ambient urban design which allows pedestrians to retain dominance. That's why Lewis' Really Narrow Streets are the easiest woonerven to implement: because the ambient urban design only offers up 10-15 ft of space and forces all users to negotiate priority within this space.

And they are so simple to understand that when I entertained some of my rural relatives a weekend not so long ago, I took them down it and they understood the rules (small car space, pedestrian has free roam) intuitively.