You probably already know how annoyed I get by all the people who want "our very own High Line" for whatever little town they live in. As I wrote last year, "If you've got anyone like that in your town, you should print them out a copy of Witold Rybczinski's excellent discussion of the economics of the High Line, and why it probably won't turn your run-down industrial neighborhood into West Chelsea unless you've got (a) dense commercial and residential development nearby, (b) a subway two blocks away, (c) lots of well-connected gay men and artists living and working within a short walk, and (d) LOTS of money, more than your town can really afford to spend."

I'll add two data points to the ones from last year: 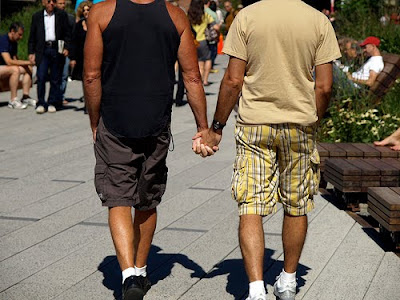 Photo: Professor Bop / Flickr
First, some documentation of the gay fundraising network that bankrolled Friends of the High Line. Here in New York we've got gay men with power and money! Is your town willing to give that much clout to its gay men? Think you can do it without them? Good luck!

The zoning amendment also capped any density limitations at a floor-area ratio (FAR) of 5.0. Does your town allow that much density around its "High Line"?

If your town doesn't do that, it's not a metropolis, and any "High Line" you build will be an empty symbol. And yes, that goes for you, Rego Park.

(I know, we still have too many highways and parking lots, even in Chelsea. The sooner we get rid of them, the better off we'll be.)
Posted by Cap'n Transit at 12:06 AM