If the MTA doesn't want to take you to work...

Even if the MTA and the DOT boneheadedly refuse to go along with any of Transportation Alternatives' recommendations, or the two I added, the City still tolerates a small network of van services to cross the river to Chinatown. If you live in Flushing, Elmhurst, Maspeth or Sunset Park and work in Lower Manhattan, you may want to try these vans. I've been thinking about posting a map, similar to the one I made for New Jersey, but I've hesitated because I don't have complete information. In this situation I'll make an exception and put it up there: 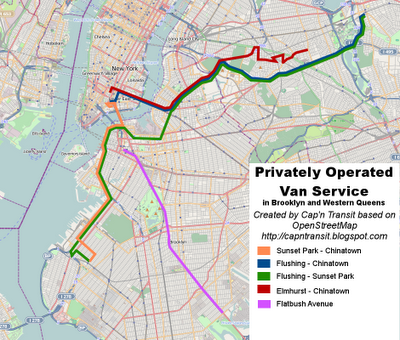 These buses all run at least every twenty minutes, and the Flushing-Chinatown and Sunset Park-Chinatown buses run more frequently. Now, the Chinatown buses are express, so you can only catch them at certain points along the line. Here are some locations where I know you can find an express bus to Chinatown:


If you're not Chinese and the drivers don't know what to make of you, just ask, "Chinatown?" That usually clears things up. The Flushing and Sunset Park locations are the best places to get the line that goes from Flushing to Sunset Park as well. The Sunset Park-Chinatown bus goes local up Eighth Avenue until it heads for the Gowanus Expressway, and the Elmhurst-Chinatown bus goes local along roughly the route I've marked on the map until it gets to the BQE, but I don't know exactly where the Elmhurst bus goes east of Broadway (if you know, please tell me). In Chinatown, here are the places to get the buses:


Here are some handy Simplified Chinese translations to help you:


I've also added the Flatbush Avenue dollar van route to the map, even though it's a local route and doesn't go over the bridge. Some of you may find it useful. If anyone knows the Utica Avenue route, please let me know and I'll add it.
Posted by Cap'n Transit at 12:45 AM

Email ThisBlogThis!Share to TwitterShare to FacebookShare to Pinterest
Labels: bridge, brooklyn, bus, jitney, manhattan, what if

There are also dollar vans on Utica and Nostrand that leave from Kings Plaza, but I'm not sure where they terminate...I'm pretty sure they don't go all the way to downtown Brooklyn (they might end at the IRT stations on Eastern Parkway? I'm really not sure...).

It's really hard to make a map of the Chinatown van services, because they use alternate routes depending on traffic conditions - they alternate between the Williamsburg and Manhattan bridges quite often, and (in the case of Flushing - Chinatown) can go up the FDR through the Midtown Tunnel, up the BQE to the LIE, and up the BQE to the GCP. On more than one occasion, the van I was on went through local streets in Greenpoint and Brooklyn.

There is one big downside to not being MTA-affiliated - due to the gas shortage, I'm hearing from friends and family that the Flushing vans will stop operating on Saturday, because they don't receive the priority at gas stations that taxis do.

I've talked to somebody who lives in East Flatbush. He says that there actually aren't a whole lot of vans down Utica: They mostly go down Flatbush.

He says they have "dollar vans" and "dollar cabs/cars". The vans usually run all the way down to Kings Plaza (I assume from Eastern Parkway), while the cars usually go no further than Avenue H. Some of them also come up from Church Avenue (from either direction), and then take Utica up to Eastern Parkway.

Then there are dollar cabs (no vans) that run down Church Avenue as well. (I think from like Remsen to East 18th Street, but don't quote me on that)

BTW, there are also some on the SE Queens lines. I know one goes from Green Acres to Jamaica, but I'm not sure what route it takes.