With TIFIA, a loss for "New York" would be a gain for transit

Newsday reported that the competition for TIFIA loans is "stiff." It was presented as a challenge for New York: will another state beat us out to get the money? But if we look beyond the simplistic rhetoric and shoulder through some boring financial details, we can see that a "gain for New York" would actually be a loss for transit. In fact, it would be a loss for New York, and a loss even for Rockland and Westchester counties.

Okay, first of all, what is a TIFIA loan? TIFIA is a law, the Transportation Infrastructure Finance and Innovation Act of 1998, that set up a program where the federal government offers loans to states and transportation agencies, which are then used to build new roads, rail lines, stations and other big capital projects. Getting a loan from the Treasury instead of selling bonds or borrowing from a private bank can save agencies millions of dollars, because they can get a better interest rate or extend the loan for a longer period.

Earlier this year, Congress put a billion dollars into the TIFIA fund for the next two years, and the Federal Highway Administration will decide who gets the loans. So far they've received nineteen applications, totaling $27 billion, so not everyone can get a loan. The New York State Thruway Authority has put in an application for almost six billion dollars, to build a replacement for the Tappan Zee Bridge. Newsday is clearly expecting everyone in the greater New York area to cheer on the Tappan Zee loan. 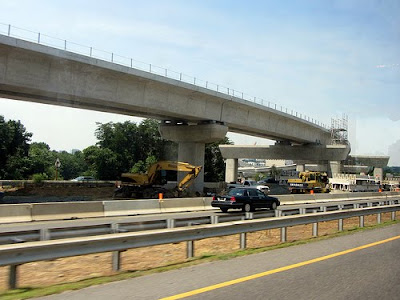 Building the Silver Line near Tysons Corner. Photo: Sean Marshall / Flickr.
Here's where it gets interesting: the Metropolitan Washington Airports Authority has also applied for a TIFIA loan, for almost the same amount ($5.999 billion instead of $5.900 billion). But their loan wouldn't fund a highway bridge, it would fund a new subway line from downtown Washington through the northern Virginia suburbs to Dulles Airport.

On the surface, the choice is clear for transit advocates. The Tappan Zee Bridge project would take a huge, sprawl-generating highway and double it, possibly with a dedicated bus lane, probably without. The new bridge will make it easier to drive for a few more years, draining the life out of the small but growing movements to rebuild Rockland and Westchester's sustainable infrastructure of compact towns connected by train lines. This inefficiency will in turn waste more local tax money and fuel, increasing demand for hydrofracking and other destructive energy extraction methods.

At the state budget level, the Tappan Zee Bridge replacement project will suck up all of the toll money that the state can manage to get out of drivers (while the elected officials from the areas with the most bridge commuters fight to keep the tolls as low as possible). At best, that means that taxpayers statewide will be forced to pay for Thruway improvements that are currently funded out of bridge tolls. More likely, general state funds will be used to pay for various bridge-related expenses, diverting money away from other state expenses, particularly transit.

In contrast, the Silver Line metro project would bring rapid transit to a part of Virginia that has long been dominated by cars. Fairfax and Loudoun counties have made it the centerpiece of their smart growth plans, in particular a project to transform the town of Tysons Corner from a land of detached houses, strip malls and office parks into an urban area with dense, walkable centers. It would ultimately be paid for by motorists on the competing Dulles Toll Road, simultaneously providing a disincentive for driving and an incentive for taking the train.

Now, WAMU is spinning the TIFIA loan as a way to keep tolls on the Dulles Road low, but it's better to have low tolls and a completed train than a toll revolt and no Phase 2.

This is a case where what is good for "New York" is not only bad for Northern Virginia, but bad for transit everywhere, and in fact for the people of New York. New Yorkers should contact the FHWA and tell them to give the cheap loan to the Silver Line train.
Posted by Cap'n Transit at 11:18 PM

Compared to some of those projects (I'm looking at you, Knik Arm Crossing) the Tappan Zee is a downright bargain.