How the high Acela fares save taxpayers money

We know that Amtrak's Acela and Northeast Regional services are among the few Amtrak services that take in enough in tickets to cover their operating costs. We also know that the fares on those trains are considered high: they're higher than any parallel commuter rail line or bus. Malcolm Kenton of the National Association of Railroad Passengers (of which I am a card-carrying member) argues that without sufficient taxpayer support, these high fares are necessary. Here's how necessary they are: 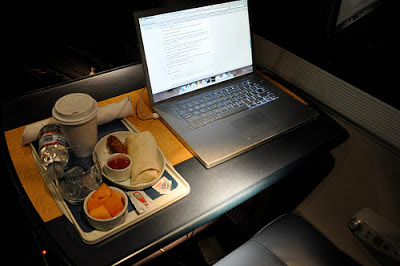 First-class breakfast on the Acela. Photo: Christopher S. Penn / Flickr.
If you wanted to go from midtown Manhattan to New Haven on a weekday morning, you could pay $70 for a business class ticket on the Acela Express, or $123 for a first class ticket. There are 260 business class seats and 44 first class seats on every train, for an average fare of $77.67. Or you could pay $14.75 and take the Metro-North commuter train. That $14.75 is just 19% of the average Acela fare.

All those $70 and $123 fares add up: total Acela revenue from last October through July was $427,414,994. That's a 76% surplus over the operating costs of $242,800,000. That money could be used to buy more train cars or upgrade signals, but currently it seems to be used to cross-subsidize some of the less-profitable lines.

People complain about the high Acela fares, but they haven't gotten Amtrak to lower them. Imagine if they had! What if all Acela seats to New Haven cost $14.75? Then the total revenue from October to July would be $81,167,577, only a third of the cost. That leaves $162 million that would have to be paid by the taxpayer.

Just to remind you: these are market rates, and the $374 first class round trip fare between New York and Boston is still a bargain compared to the $470 coach fare on the Delta air shuttle, let alone the $568 first class fare. The trains are mostly full. If Amtrak charged lower fares the trains would always be full, and a lot of people still wouldn't get a chance to ride. Lower fares wouldn't allow more people to ride, they would just give poorer people a better chance to ride.

The reason that there hasn't been much pressure on Amtrak to reduce its fares is because there is a cheaper alternative for people who can't afford to pay $38 to ride to New Haven. They can pay $14.75 for a Metro-North ticket, which takes half an hour longer, doesn't guarantee a seat and has no cafe car. Or they can pay $22 for a Greyhound or Peter Pan bus. They may even get a Megabus seat for $5. For those going to Boston, Philadelphia, Baltimore, Wilmington or Washington, there are also Chinatown buses and Bolt Bus. That frees Amtrak from the requirement to offer charity service in the Northeast Corridor and allows them to charge market rate fares.
Posted by Cap'n Transit at 11:51 PM

New York-New Haven is dominated by Metro-North, which just shows you what trains are capable of when the fares are sane and the tickets are flexible, even when the comfort level is less than great and the speed is meh. Travel time to the Midtown station is about the same on Amtrak and Metro-North, but Metro-North leaves you at a better-located station, and also has a secondary station at Harlem. Amtrak has 2,000 daily (not weekday) boardings at New Haven, to all destinations; Metro-North has 4,000 (on both weekdays and weekend days), almost all going to Manhattan.

Of course Metro-North is subsidized, and its systemwide operating costs are actually higher than Amtrak's per passenger-km, but systemwide Metro-North is very peaky, which raises costs. New York-New Haven is unique in that it's not peaky, so it may well be a net contributor to the bottom line since it fills seats on weekends and in the off-peak.

Perhaps section 8 for trains is in order? Or a lottery?