There are worse things than congestion

Chuck Marohn has been on a tear lately against the goal of "fighting congestion." He got going on this particular tear in September with a post about the empty stroads of Kansas City, arguing that by eliminating congestion, the government drove the life out of town. I have no idea why he didn't pick up on my snot metaphor from February, but I'm glad he's posting this stuff.

I want to add a data point here: with pricing you can reduce congestion and still have a vibrant urban center. But the pedestrian environment suffers. I'm talking about the case of London.

From the beginning I was a supporter of congestion pricing here in New York. Some of my first blog posts were about congestion pricing. I fought hard for it. I still think it's done some good things in New Jersey, and would be an improvement over what we have now. But until recently I had never seen it in action. I have now been to London for the first time since congestion pricing was implemented there, and I have some serious concerns. 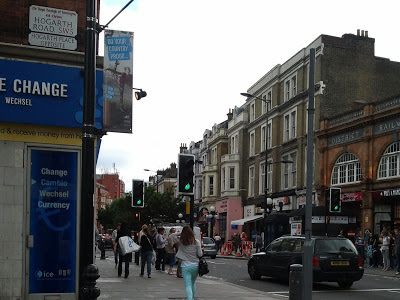 While in London I almost never saw a traffic jam. Wherever I went, cars seemed to be flowing freely. In theory that's good: people and goods get where they need to go, without being stuck in one place polluting too long. But in order to get the cars to move that freely, London's traffic engineers made the pedestrian environment much worse.

It's my understanding, based on the work of Ben Hamilton-Baillie, that Greater London started making things difficult for pedestrians long before congestion pricing was enacted. The photo above illustrates a suite of anti-pedestrian tactics employed to speed cars. The Earl's Court tube station, on the right, is a very high-traffic pedestrian "destination" (in that the pedestrians temporarily become transit riders); you can't see that many of them, but there are a large number of people waiting to cross Earl's Court Road, the two-lane street in the picture.

Earl's Court Road is only two lanes wide, but it's one-way in order to allow faster cars to go around slower ones. There is no parking allowed on this section of the road, to provide more space for driving. The side streets around the Tube station are one-way in opposing directions, so that no driver has to cross the road. Because of this, the only reason for the traffic lights in this picture is to give pedestrians a chance to cross the street.

The lights themselves were timed to allow lots of cars to move through the intersection, while forcing pedestrians to wait and then rush across as soon as the light changed. There may have been a "beg button" as well; I certainly saw a lot of them in London. The lights were also spaced fairly far apart; there were several times when I saw an interesting shop or restaurant on the other side of the street, but couldn't get to it without going two or more blocks out of my way. Even though Earl's Court Road is narrower than most Manhattan cross streets, there was very little jaywalking because the cars came so fast.

Throughout London I saw plenty of other devices designed to speed cars at the expense of pedestrians. There were fences, Z-crossings and dedicated turn lanes. Despite having wide sidewalks and lots of street life in many places, it was not a very pleasant place to walk. The side streets tend to be calmer, with neckdowns and raised crosswalks, but it's very hard to go anywhere in the city without spending some time on larger streets like Earl's Court Road or worse.

What I'm describing are feelings of anxiety and frustration that I had as a pedestrian, but are they justified? I don't have hard data for London, but in July staffers at the Utah Department of Transportation found that people tend to die and get injured in car crashes more in places with low congestion.

So what can we take away from this? First of all, I think congestion pricing can still help. But we have to keep congestion in perspective. That means that as cars start to flow, we would improve the pedestrian environment, thus slowing them down. Restoring two-way traffic, restoring curbside parking, adding lights at more intersections, removing fences, giving more time to pedestrians - these are all relatively cheap strategies that can be implemented for almost no cost. I hope that London will continue along that path, and that if New York does implement congestion pricing, that we use some of the same strategies to keep the streets calm and safe.
Posted by Cap'n Transit at 12:33 AM

England also has an odd law system where the cars have the absolute right of way at intersections without marked crosswalk.

The crosswalk is behind the stop/yield line, and as a pedestrian, you are expected to wait to cross even these minor streets until the cars are done. You could find yourself halfway across these tiny roads and a very quick moving car would not even slow for you, as theyd assume youd know to stop.

On the other hand, the zebra crosswalks (shown off to the right) are very well respected, but are rare.

Yet England has one of the lowest pedestrian death rates in the world.

Beg buttons have their uses. At most of Londons crossings they have no use as all lights are under the cities traffic managements control.

It's just a hold over from a standard design.

But further out from the centre, the buttons do have use where late in the evenings where traffic levels are lower light will change at pedestrian request rather than having to wait for a full light cycle.

London's streets are not wide enough for moving traffic and parking. Often parking has been eliminated in favour of Bus lanes.
So often pedestrians are walking along streets with moving traffic next to them.

In recent years there has been a trend to eliminate pedestrian railings at junctions as part of street decluttering. But it has hit a snag. Earlier in the year there was a hugh and cry because pedestrian deaths did not fall this year. It turns out this is due to 7% higher accident rate at some junctions where railings have been removed.

There is now a review to make sure that any future removals are more carefully considered.

At transit stations, it would be possible to add an entrance on the opposite side of the busy street. Naturally, non-transit pedestrians would use it as well.

Skybridges would also work, but in the US, disability codes require a long ramp or elevator.

Some cities have implemented this with second floor retail, providing multiple uses for the bridges.

I had two great examples for pedestrian grade separations that I used to show students at a Boston-area school the issues...

Question 1 was: how many of you are familiar with the ped bridge over Huntington Ave that connects the Prudential Mall with Copley Place? (Everyone knew.)

Question 2 was: how many of you are familiar with the ped crossing under Mass Ave at the Orange Line station? (Blank stares. This was around the corner from school, yet no one knew it was there.)

Then we noted that the city had recently put in a crosswalk at-grade at Mass Ave, because that's where people wanted to cross, and that even at the Pru, the existence of the ped bridge had not negated the need for street-level crosswalks, which still exist... the point being that a ped crossing can be useful if it connects two very strong attractors, but even then, it doesn't do much for people on the street.

LA's downtown has much of the same silliness. You can go for blocks without going down to street level, but guess where everyone crosses. And in Universal City, Metro might end up building a ped bridge over Lankershim that no pedestrian wants. Yes, there should be an exit from the subway station on both sides... but there still need to be good crosswalks.

Great post; I'm also interested in the details that make an urban landscape more or less pedestrian-friendly. Here in Toronto I'm a big believer in the power of using surface transit wisely to do just that: Toronto's most pedestrian-friendly neighbourhood (Kensington Market) is a square with each side having a different, heavily-used streetcar route. Three of the routes run in mixed traffic meaning that when the streetcar stops in the center lane to let passengers off or on, all traffic including curb-lane traffic, must stop. Pedestrians on these and other (non-streetcar) roads have an implicit sense of ownership of the streets, which as a cyclist can be somewhat annoying as they step into the road without even looking ;) Still, on the whole it's great and I wouldn't want buses.

I'm not familiar with London. However, I'm more familiar with Hong Kong, which uses much of the same traffic control methods as the UK (roundabouts, Z-crossings, beg buttons, pedestrian railings) a lot more frequently, and which uses pedestrian overpasses and underpasses very frequently as well.

The one positive thing I had to say about the whole thing has to do with the beg buttons. I don't quite like the concept of "begging" for a chance to cross the road much, but each crosswalk had bumpy surfaces just before the curb, and the beg buttons (which were at every intersection) emitted a constant, ear-splitting beeping noise. Whenever the beeping was slow, it meant "don't walk." Whenever the beeping was fast, it meant "walk." Whenever it was fast but in short blips, it signaled a change in the light.
There were crosswalk lights, too, but the amount of provision for the blind at intersections was staggering. It was certainly more audible than the NYC beg buttons - they can be hard to hear over the din of city traffic.