The Port Authority rooftop should be for buses

As I've written before, there are a lot of buses and trains bringing commuters to Manhattan every morning and taking them home at night. Specifically, there are a lot more peak-direction commuters than reverse commuters. When you have that kind of imbalance, you have four options: run vehicles mostly empty back to the origin, as is done with some of the MTA express buses; run the vehicles through the center to the outskirts on the other side mostly empty, as is done with the subway; "deadhead" the vehicles with no passengers to a yard or garage on the outskirts; or store the vehicles in the center.

A lot of the buses that bring commuters through the Lincoln Tunnel into the Port Authority Bus Terminal turn right around and head back through the tunnel, empty. You can see them in the late morning heading out, and in the early afternoon heading back in to pick up passengers. If you've ever gotten stuck in tunnel traffic alongside them, you know what a tremendous waste of tunnel capacity that is.

Many of the Port Authority buses are actually stored in Manhattan, though. The terminal itself has limited storage space, so some bus operators will park on the street. This is something of a problem in that the bus drivers often circle around Midtown until they find a space, adding to congestion on the street.

Some people are more upset about the lost parking: drivers who want to park in those spots, drivers who want other people to park in those spots instead of in "their" spots, and merchants who believe that all their customers come by car. It also bothers people who think of drivers as "us" and transit users as "them," because they see the space as wasted if it's serving transit riders.

The Port Authority planned to spend $800 million on a new bus garage in Midtown, but one of Chris Christie's first acts as Governor of New Jersey was to take the money and use it to stave off a gas tax increase. With any luck, next year he'll be replaced by someone who actually gives a shit about transit riders, but can anything be done in the meantime?

Hm. Imagine if we could add a floor to the Port Authority Bus terminal and use that for bus parking. We could probably fit a hundred buses up there. Gee, what's up there now? 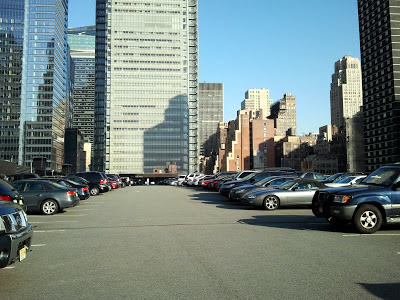 Does anyone at the Times know about this?
Yes, that's right, more than a city block full of parking. The Port Authority owns a ton of space up there, and is currently leasing it for parking up to 1500 private cars at a time. If you feel like driving through the Lincoln Tunnel, you can pay a company called LAZ to park your car there. The ramp to get there is right next to the bus ramp, at the corner of 40th Street and Dyer Avenue. If you're on foot, check out the elevators at the east end of the South Wing, right near Annie's Pretzels. I assume the rates are competitive with the Midtown parking market, but I haven't been able to find a rate sheet, so if anyone knows roughly how much they charge per day, please let me know.

In any case, if you've just unloaded a bus, sorry, you can't park there. And I kinda sorta understand that for the fifth and sixth levels, because the clearance is pretty low: 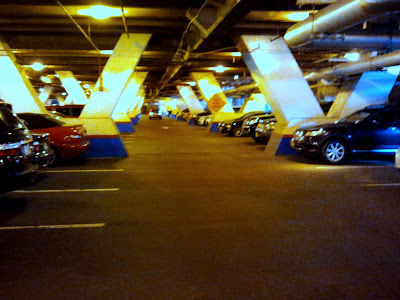 You'd have a hard time fitting full-size coaches in there, even if you took out all those pipes. You could probably fit a bunch of vans in there, but the van drivers seem to have made pretty good deals for surface parking all by themselves. Still, why not use the top level for parking buses?

Incidentally, those 1500 cars constitute eight percent of the 18,500 cars that cram through the Lincoln tunnel every morning. That's a relatively small fraction, but big enough to have an effect on congestion. And note that the Port Authority has a conflict of interest here: each car that parks there pays a daily parking fee and a tunnel toll.

Conflict of interest or not, though, this is bullshit. Maybe there's nothing else that can go on the fifth and sixth levels, but the open seventh level should be bus storage.
Posted by Cap'n Transit at 12:16 AM

The problem is there is no way you could get a bus up the ramp to the parking levels. It's a very tight turn between each floor.

It was clearly always intended for cars only. They also added a few hundred spaces a few years ago by extending to the roof of the northern building.

Good point, Eric, but the trick is never to say never, but just to ask how much it would cost to build a new ramp for buses.

The PA could set aside that space for carpools and vanpools. If the roof deck is strong enough to handle commuter buses, then a couple of vehicle elevators might be a way to get them up there.

'If you've ever gotten stuck in tunnel traffic alongside them, you know what a tremendous waste of tunnel capacity that is.'

Broadly, then, we should let tunnel tolls rise to the market clearing price (probably time-dependently) - i.e. till the tunnels are uncongested at all times.

Similarly, we should not ignore the opportunity cost of the garage - how much would it be worth in rent if it were converted to apartments or offices or restaurants or whatever.

Didnt realize so much space was up there. Weve heard time and time again that the bus station is 100% at capacity (it is) and yet.....I guess its not.

If the ramp is an issue, Id bet it would cost less than $800 million to make the roof another bus level. Megabus, Boltbus, looks like capn has found your terminal.