I just want to take a minute to talk about the ... strange statement that came out of the Straphangers Campaign last week, in response to the MTA's fare hike proposal. I'm trying to be polite here, but it's, um, puzzling and frustrating. Here's part of the quote that Ben Kabak ran:

New York City Transit already has the highest fare box operating ratio in the nation at 53%. That is the share of operating costs covered by fares. MTA Chairman Joseph Lhota said in September that “when you compare the public support given to mass transit agencies nationwide on a per customer basis, New York ranks at the very bottom.

In comparison to New York City Transit’s 53% ratio, the average for large systems nation-wide that operate both buses and subways was 38% in 2011. That’s according to the Federal Transit Administration in 2011, its most recent figures. Looking at big cities that run both subways and buses, the farebox operating ratio in Boston was 38%, Chicago 44%, Los Angeles 27%, Philadelphia 37%, and Washington, D.C. 42%.

Forget big cities; let's look at cities with really low farebox recovery. These are the top agencies in the country, right?


This is a really weird way to think about farebox recovery. There are a lot of transit systems in other parts of the world, and even in this country. that have a much higher farebox recovery ratio. If you don't want to go to Hong Kong, just head up to the Port Authority for a bus to the exotic land of Hudson County, New Jersey, where all the most frequent routes are privately owned and operated. Sure, the Port Authority runs the PATH trains and the state of New Jersey runs a slew of coverage and anchor routes. But if you added up all the routes, I'm guessing the farebox recovery would be way above 53%. 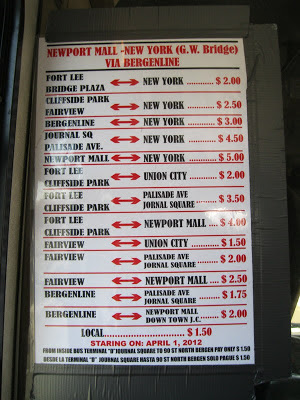 Does Hudson County have an inferior transit system? Well, yes. They only have two subway lines and one light rail line, and everything else is buses that can get stuck in traffic or ferries that don't go very close to people's homes. Some of the buses are crowded or noisy, or have saggy seats. But that's not because they have a high farebox recovery ratio. It's because the zoning is crazy, and encourages people to drive instead of taking transit. With all the parking that's been built, it's a wonder that anyone takes the bus.

People do take the bus in Hudson County, because it's frequent and convenient. That's a lot more than you can say for the buses run by the Southeast Tennessee Human Resource Agency, even if they are a bit newer and cleaner.

If anything, we should be shooting for a higher farebox recovery ratio. That would insulate transit users from the predatory demands of people like Lee Zeldin and Scott Vanderhoef. If we pay for all our transit, what would they be able to take?

The fact is that farebox recovery doesn't have anything to do with pubic support for transit, and it doesn't have anything to do with the quality of transit. It's a reflection of the efficiency of the transit system (supply) and the lack of competition from cars (demand). That's the bottom line. Hearing Gene Russianoff kvetching about high farebox recovery is discouraging, and hearing Joe Lhota repeating that is depressing.
Posted by Cap'n Transit at 12:20 AM

If you want to measure "support given to public transport", support per capita would do.

After all, high farebox recovery could measure the scale economies achieved as a result of providing more effective support than another area with a skeleton service.

Yeah, Metro Transit's farebox ratio is around 30 to 33%. They're the 1st- or 2nd-best among their "peer group" of transit systems (roughly a dozen other metro areas of similar size, give or take quite a bit).

Some of the country's really big systems do better, though some don't -- SF Muni only has about 22% farebox recovery, for instance. I've seen numbers all over the map for New York, and I haven't spent the time trying to track all of them down and average things out. The NYC Subway has a vastly different farebox recovery than the MTA buses, if I recall correctly.

People have made similar complaints about service levels in Minnesota, and farebox recovery has been one data point. There could be a lot more service in the area if we subsidized transit to the extent that San Francisco does, for instance. I simply consider it a piece of evidence that the region is likely under-served by transit, but don't really think we should try to target the farebox ratio found in other cities. Other measures of mobility and access should take precedence.

The key is the level of public support given to autos (through highway spending, public parking garages, zoning, parking requirements, etc.)

If you provide a high level of support to cars, and then expect farebox recovery, that's not going to result in any decent transit. If you drop that support, though, it's much more reasonable to expect a higher level of farebox recovery.

NYC, although it offers lots of support for autos outside of Manhattan, has limited support for them within it, and so the transit can be competitive with a relatively high farebox recovery. Hong Kong even more so.

Are you sure that New Haven's buses have 0.5% farebox recovery? Those buses aren't free, and there are enough routes with semi-decent ridership that farebox recovery should be more like 10 or 15%.

Interestingly, BART's extension plans to Marin called for something along the lines of 130% farebox recovery with 350,000 daily trips. I'm surprised that ethic hasn't seeped down through the decades.

Cap'n: thanks, I thought GNHTD was just a CT Transit division for some reason.

Greater Marin: if I remember correctly, those plans for high ridership and revenue were scaled down when Marin County enacted zoning restrictions to prevent new development. BART started to oppose expansion into Marin then because the trains would need to be subsidized by the rest of the Bay Area, and San Mateo County had just opted out of BART.

Fares are for rationing, not revenue. When Guangzhou removed fares during the Asia Games, they had to quickly reverse the decision because of massive overcrowding. http://farefreechina.blogspot.com/2010/11/here-is-proof-people-want-free-transit.html
If introduced gradually, Zero fare-box recovery works, Here is where: http://fptsuccess.blogspot.com/

@fpteditors: The large majority of buses and trains in New York City do run with reasonable amounts of people on them, and the city has chosen to use POP (albeit a very inefficient form of it) to speed up bus service where needed.

That being said, SIR should be made zero-fare for all trips, because for all trips not heading to St. George or Tottenville, you don't need to pay a fare anyways.

In any case, most of the SIR riders are going to one of those two stations.