The wrong lessons to take from the livery van failure

In his frustrating blog post from June about the "failure" of Chinatown buses, Will Doig also alleged that local private van service had failed:

And most important, it’s been tried before — not just in New York, but in many cities — with miserable results. "There was this expectation that these vans would be a perfect substitute for conventional transit," says Columbia University assistant professor of urban planning David King. But, "There are a lot of real problems when you try to formalize informal transit."

I know it's been a few months, but I've had this sitting half-finished in my pipeline, and it leads to an important point. But first, I haven't heard any evidence of an expectation that private vans would be a perfect substitute for conventional transit. Worse, Doig gives no details about what "miserable results" or "real problems" he and King might be referring to. Routes are expanding and the operators are buying bigger and better buses. To me that suggests either success or massive over-leveraging, and the second possibility is highly unlikely in this economic climate. 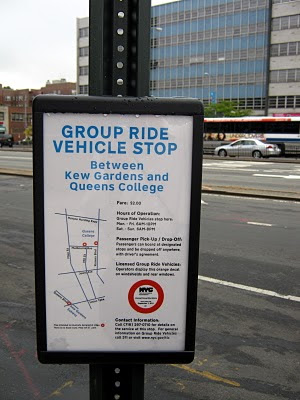 My guess is that King was referring to the failure of the Taxi and Limousine Commission's 2010 Group Ride program, which I covered extensively at the time. There were indeed several problems, and I came up with eight recommendations:


The problem with King's statement, and Doig's, is that most of these things are not specific to "these vans," but they're true when you're launching a new transit service of any kind. They're also not about "trying to formalize informal transit," but about the perils of expecting to make a profit on unprofitable routes.

It's just lazy to give something a half-assed try and then say, "oh, well I guess it doesn't work," especially when it's working pretty well right across the river. Of course, King's statement was fairly nuanced and qualified; it's Doig who turned it into a blanket condemnation of privately owned transit.

If anything has failed, of course, it's Taxi Commissioner David Yassky, who's also promised a hybrid taxi fleet and a borough taxi program. It's then-Deputy Mayor Stephen Goldsmith, who has been awfully quiet since he left under accusations of domestic abuse, but who showed with this project that he's not a budget-cutting privatization guru. And of course it's Mayor Bloomberg, who hired these guys and gave them their orders.

Legal private transit still has a chance of working in New York City. Hopefully we'll give it a try one day.
Posted by Cap'n Transit at 11:54 PM

It is basic math. When you let the vans loose only after people have adjusted to having no service, it will fail. The vans had to run on the first weekday of the cut in order to succeed. The vans were sabotaged by the city.