Why Fifth Avenue is so great

When I first moved back to New York City in my early twenties I was living with my dad on the Upper West Side. I had a friend living on the Upper East Side and another in Greenwich Village. When we got together, we shook the world. We would stay up until dawn taking dangerous drugs, having kinky sex with beautiful artists, creating the definitive rock and roll record and brainstorming solutions to the city's problems.

Okay, we actually just drank a lot of root beer and watched Star Trek until midnight. But after that, we walked on Fifth Avenue. Fifth Avenue was great after midnight. 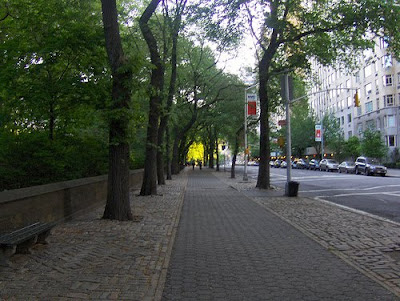 Fifth avenue at 68th Street. Photo: "Joe Shlabotnik" / Flickr.
It wasn't great in a dramatic way, like Saint Mark's Place might have been. It was quiet and beautiful, and it felt safe.

I could have walked home through Central Park, but it still had a reputation for being unsafe at night. I could have taken the crosstown bus, and sometimes I did, but those were infrequent, and crowded when they did come. When the weather was nice it was better to walk.

I walked down Fifth, across Fifty-Seventh Street and up Central Park West. Fifty-Seventh was also great after midnight. The Steinway piano showroom with its convex window was still lit up, and there was always a deli or a cafe open late. Without the crowds, the wide sidewalks were luxurious.

I recently listened to an old KunstlerCast, one of the best, called "Missing Teeth in the Urban Fabric." There's a ton of great stuff in that episode, but one of the best is Kunstler's summary of a discussion by the architect William Rawn about why Fifth Avenue works.

Fifth Avenue is what Rawn calls a "one sided street": it has buildings on one side and a park on the other. Like Rawn, I've seen a lot of one sided streets, many of them probably inspired by Fifth Avenue, that didn't work as pedestrian spaces.

Why do Fifth Avenue and Central Park West feel so quiet, beautiful and safe, while Queens Boulevard does not? Here's what Rawn has to say on Page 42 of his thesis (PDF):

Upper Fifth Avenue is a well-known street. Though not a commercial street and admittedly quite different from the Fifth Avenue south of 59th Street, nonetheless it is exceedingly vibrant and full of activity. Here is a street which has no shopping and yet is always full of people. Some are walking fast with a strong sense of mission; others are simply strolling. It should be noted that the strong side of the street is marked by a series of apartment and hotel buildings usually 10-15 stories high. The weak side, along the park, is marked by a set of factors of continuity. There is a high wall (seven feet high, too high to see over) running along the edge of the park. There are several rows of trees paralleling the street. There are periodic openings to the park but these usually occur every three or four blocks. Walking along this street, one is not really part of the park, except that the trees and sometimes the hills of the park can be seen over the wall. One knows that he is part of the street; one sees what is ahead and behind. There is a sense of balance. In effect, one does not feel he is about to fall off the edge into an undefined park setting, but instead feels that he is part of a well defined street setting.

Rawn goes on to talk about three other "spines" (the Alamitos Bay Boardwalk in Long Beach, California; the Rue de Rivoli in Paris and the cafe fronts of Ibiza), but Fifth Avenue is enough to talk about tonight. The walls are definitely not seven feet high in the picture above; I think they're only four feet, but the trees behind them create a barrier that is opaque but not blank. They may be seven feet high north of Eighty-Fifth Street.

Regardless, I think Rawn is right about the value of the walls defining the space. Compare that to any place where there is a tall fence, like the Queens Botanic Garden. You can see into the garden, so the visual separation is not sharp, but the height of the fence makes it feel inaccessible. The regular openings in the Fifth Avenue walls are also important, because they make it clear that the wall is a boundary, not a barrier.

Queens Boulevard along the Calvary Cemetery in Woodside has a high wall and at least one row of trees paralleling the street, but there is only one opening to the cemetery on that side. The wall is at least seven feet high, maybe nine.

What Rawn doesn't note is the luxuriousness of the pedestrian environment along Fifth Avenue. The street is a hundred feet wide in some places, the same width as many of the most dangerous streets in the city, like the Bowery in Manhattan, 21st Street in Queens, Broadway in the Bronx and Atlantic Avenue in Brooklyn. So why does it feel so nice to walk on? Maybe because there are only two lanes of general traffic, a bus lane and a parking lane, for a total of four lanes for motor vehicles, spanning only forty-five feet. The rest of the street is available for pedestrians: twenty feet on the east side and thirty-five feet on the west. That western sidewalk is not all paved, but much of it is available for walking or standing, and there are many benches.

This immense width has an interesting effect. When I walk down Fifth Avenue I don't mind not being inside the park, because the Fifth Avenue sidewalks are themselves a kind of park. With the line of trees, sometimes I can even ignore the cars and just think of the sidewalk as Fifth Avenue.

By contrast, on Atlantic Avenue the cars have four travel lanes and two parking lanes, for a total of sixty feet. The sidewalks are twenty feet each, relatively generous for Brooklyn, but not wide enough to give that feeling of luxury. Queens Boulevard by the Calvary Cemetery is two hundred feet wide, with only fifteen feet of sidewalk. Of the sidewalk on the south side by the cemetery, only ten feet are usable; the rest is depressed grass filled with litter.

This is what I take away from Rawn's study, what makes a good one-sided street. You need a wall, not a fence and not too high, and you need gaps in the wall. And this is what I add: you need wide sidewalks.

Finally, let us all give thanks that this "multiply signed" petition from 1905 to tear down the Fifth Avenue wall and "create a new Park drive and bridle path" never went anywhere.
Posted by Cap'n Transit at 1:25 AM

I'm kind of surprised that the Rawn study didn't mention either Kevin Lynch (also from Boston, MIT!)or Jane Jacobs both of whom are famous for discussing somewhat similar phenomena under the names, I believe, of "edges," "borders" and "border vacuums" (e.g., see Chapter 14 of "Death and Life . . . ").

Here's PART of what Jacobs has to say:

"The only way, I think to combat vacuums in these cases is to rely on extraordinarily strong counterforces close by. This means that population concentration ought to be made deliberately high (and diverse) near borders, that blocks close to borders should be especially short [which is true, as the short end of blocks face Fifth Ave.] and potential street use extremely fluid, and mixtures of primary uses should be abundant; so should mixtures in age of buildings. This may not bring much intensity of use right up to the very borders themselves, but it can help confine the vacuum to a small zone. Near New York's Central Park, much of Madison Avenue to the east operates thus as a coutnerforce to the park's border vacuum. On the west [Central Park West, then considered more dangerous?], there is no such close counterforce [as Columbus Ave. is much further away]. On the south side [bustling Central Park South, with its hotels and restaurants?), the counterforce operates as far as the sidewalk opposite the part."

Let me add that I think the doorman (e.g. hailing taxis, opening doors, etc.) also help -- as Jacobs has mentioned with regard to Park Avenue -- by providing paid eyes on the street. And the buses running down Fifth, of course, also help.

I agree that the the low stone wall helps as it prevents thieves from mugging people and then easily fleeing into the park. (Oscar Newman wrote about this kind of thing in his "classic" book, "Defensible Space" -- which is now, unfortunately very hard to find.)

I'm not at all convinced of the merits of the low wall.

Would you say that Madison Square Park is unsuccessful where it is separated from Fifth Avenue by a fence? Is the open edge of Union Square along 14th Street bad?

P.P.P.S. -- Also, while I agree that a low wall helps, I also disagree (as has another commenter) that a low stone wall is necessarily better than a fence or high fence.

I think a low wall is nice, because it's more attractive, and I think that it works in this case because the other side of the wall is often hard to traverse (for a mugger). Sometimes there's a big dropoff or sometimes a steep incline, and sometimes there's lots of shubbery that's hard to get through. In any case, I think a high fence would be even better in terms of safety, but that a nice low stone wall is more attractive.

Let me speculate that it actually is the "outdoor room" design of Fifth Avenue that makes the key difference.

The benches are recessed between a deep tree spacing and combined with rich pavement surfaces. Calvary, by contrast, feels like being squeezed up against the bottom of a cliff with the high wall, hard against the wall on a narrow sidewalk.